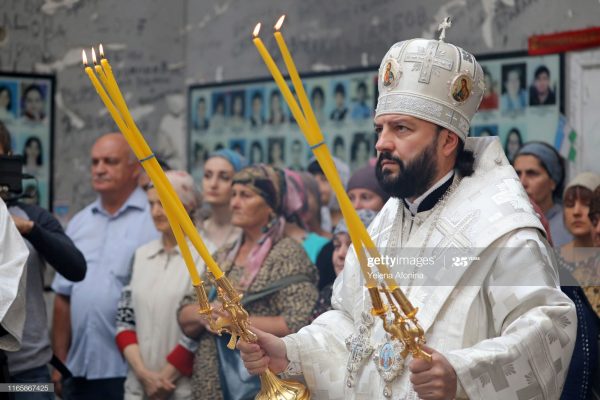 The article by Archbishop Leonid of Vladikavkaz and Alania, vice-chairman of the Moscow Patriarchate department for external church relations, published by IA REGNUM. Archbishop Leonid of Vladikavkaz and Alania

On 18 May 2020, President of Montenegro Milo Djukanovic stated that the formation of an autocephalous Church of Montenegro is opposed by those who stand out at the same time against ‘the independent and sovereign state of Montenegro’. ‘We have resumed the state. The time has come to resume the Church as well. We have proposed a decision that would imply the existence of an Orthodox Church of all the believers. If the Serbian Orthodox Church rejects this decision, it will be a Church for ethnic Serbs in Montenegro. But then we will create a Church for ethnic Montenegrins. We will try to see to it that such a church receives autocephaly and recognition’, he said.

It should be noted that Mr. Djukanovic does not realize that the state power has no right to establish an autocephalous Church on its own. The factors that give grounds for establishing a new autocephaly may be the political independence of a territory on which an autocephalous Church is to be formed, its geographical remoteness, the region’s difference from the principal territory of the kyriachal Church, but these factors in themselves are insufficient for autocephalization. The essential condition for establishing an autocephaly is the striving for it by the church people, clergy and episcopate of the respective church region, comprising at that a considerable majority on all these levels. The decision to grant autocephaly is made by the supreme power of the kyriarchal Church (in case of Montenegro, the Serbian Orthodox Church).

There have been disputes held around the right to autocephaly, which often lead to disorders and even divisions, up to a rapture of canonical communion. In addition to the decision of an Ecumenical Council (which has not been convened for over 1200 years), it is only the will of the kyriachal Church that can be a lawful factor for establishing a new autocephaly. It sometimes happened so that autocephaly was declared by a state power body or a local episcopate who went beyond the control of the conciliar episcopate of the autocephalous Church and its primate. The lawlessness of such actions is evident from the canonical perspective, although in those cases when it was caused by really ripe needs of church life arousing in the wake of an arbitrary action of division, it was successfully healed by the later lawful granting of autocephaly by the Mother Church.

Today, the Montenegro authorities seek to discriminate the rights of the largest group of believers in their country – the faithful of the Serbian Orthodox Church. The parliament of that country adopted a bill ‘On freedom of conscience and religious organizations’ whereby the facilities and lands of religious communities shall be returned to state ownership if they did not belong to these communities before 1 December 1918. It means that the most of religious facilities, which belong to the Serbian Church in Montenegro, have to go to the state. The aim of this law is to weaken the Serbian Orthodox Church in the territory of Montenegro and support the schismatic stricture – ‘The Orthodox Church of Montenegro’. As of today, this religious community is very small but positioning itself as the only ‘church’ of the Montenegrin people.

The current authorities of Montenegro do not conceal that they are active supporters of eurointegration and isolation from Serbia and for this reason they seek to discredit the common historical spiritual and cultural heritage of the Serbian and Montenegrin peoples. That is why they pursue the aim to weaken as much as possible the influence of the Serbian Church in the territory of Montenegro and later on, possibly, to gain the recognition of their ‘pocket’ church structure by the Patriarchate of Constantinople. There is an unfolding information bullying to hurt the Serbian Orthodox Church’s Metropolis of Montenegro and the Littoral the faithful of which are accused of ‘Serbian chauvinism’ and resistance to the independence of the state of Montenegro.

All this very much reminds of the scenario according to which the former Ukrainian president Poroshenko and his team used to support and legitimize the Ukrainian schismatics. With external political support, the former Ukrainian leaders managed to pre-engage the Patriarchate of Constantinople, which recognized the merger of schismatic groups as an ‘Orthodox Church of Ukraine’, thus bringing trouble in the world Orthodoxy. In Ukraine itself there began a real persecution against the faithful of the canonical Ukrainian Orthodox Church through aggressive nationalists, supporters and even ‘clergy’ of the OCU with the indifference and non-interference of local authorities. At the same time, an information campaign unfolded against our Church. The faithful of Ukraine, despite the pressure, threats and direct violence, have remained faithful to canonical Orthodoxy. We see the same faithfulness in Montenegro as well.

The Russian Orthodox Church has given its sister Serbian Church all possible support. In the Patriarch and Synodal message adopted in December 2019, there is a call to the Montenegrin authorities to ‘come to their senses and instead of mythical ‘great-Serbia chauvinists’ to see in the Orthodox faithful their own grandfathers, fathers and mothers, brothers, sisters and children. It is impossible and senseless to declare the canonical Church, which united a majority of the citizens of their country, a conductor of foreign hostile influence’.

In February 2020, during the meeting of Primates and delegations of the Churches of Russia, Serbia, Romania, Poland, Czech Lands and Slovakia, a problem was also raised concerning the situation of the Orthodox faithful in Montenegro. In their communique, the participants in the meeting noted that the authorities of Montenegro should ‘respect and defend the fundamental right to property, including that of the Church’.

On May 12, after the procession with the cross held on the commemoration day of St. Basil of Ostrog, Bishop Joanikije of Budamlja and Niksic and seven priests of the cathedral in Niksic were detained by the Montenegrin police. Thousands of believers from all parts of Montenegro took to streets in protest against the authorities’ behavior, which expressed their hostile attitude to Serbian Orthodoxy. On May 14, the chairman of the Moscow Patriarchate department for external church relations, Metropolitan Hilarion of Volokolamsk, in his commentaries to RIA Novosti new agency, expressed concern for the destiny of the clergy and called for their immediate release. On the night of May 16, the detainees were released.

It is absolutely clear today that the interference in the life of the Church by secular authorities pursuing their political interests is fraught with unpredictable consequences since it brings divisions and generates discord in society with regard to such a delicate matter as a religious one. We should clearly realize that western political technologies and current politicians have seriously put their hands at the religious theme, making it an instrument for achieving their goals in Eastern Europe and the Balkans.

In the mid-20th century, with the help of the Russian Orthodox Church the longstanding Greek-Bulgarian schism was overcome. I am confident that today’s schisms too, initiated by shortsighted statesmen and morally unscrupulous hierarchs and false-hierarches, with God’s help will sooner or later be cancelled. Today, we all should clearly realize where distinction lies between truth and falsehood and pray for our brother and sisters who suffer from the gross interference of secular authorities and remain faithful to the spirit of church canons and their centuries-old religious and historical tradition.

Archbishop Leonid of Vladikavkaz and Alania