Source: Ucanews.com
Shama Bibi was four months pregnant when she and her husband were killed
Natalya Mihailova | 06 November 2014
New details have emerged about the killing of a Pakistani Christian bonded laborer and his wife, who were killed after being accused by local Muslims of blasphemy. 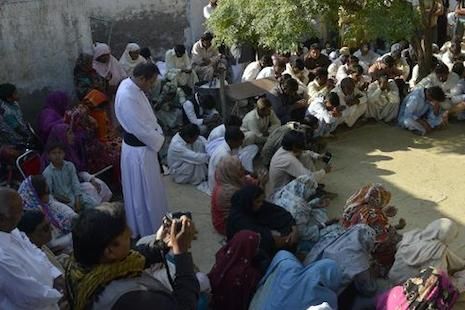 Shehzad Masih and Shama Bibi, who was four months pregnant at the time of the killing, were locked inside a brick-making factory before their murder to prevent them from fleeing their debts, relatives said Wednesday.

The couple were later beaten, surrounded by a crowd of up to 1,500 villagers and then thrown on top of a lit furnace, multiple witnesses said. By the time the Muslim mob was done, only charred bones and their discarded shoes remained.

The gruesome incident took place Tuesday in the tiny hamlet of Chak 59 (village 59) near Kot Radha Kishan town, some 60 kilometers southwest of Lahore.

It has sparked protests by Christians and outrage among rights activists, with police arresting 44 suspects as of Wednesday.

Jawad Qamar, a local police official, said according to initial reports events began to unfold more than a week earlier with the death of Shehzad’s father, a local religious healer.

“When he died, Shehzad’s wife went to his room and cleaned up the mess. There was a trunk in his room, Shehzad’s wife took the things that could be useful and threw the trash in front of her house,” said Qamar.

“The garbage collector collected the trash the next day and told a local cleric that he had collected pages of the Koran thrown in front of Shehzad’s house from the trash.”

Iqbal Masih, Shehzad’s older bother, said that he and his whole family were bonded workers paying off their debts to the brick kiln owner, a man named Mohammed Yousuf — an illegal practice branded by rights groups as akin to modern-day slavery.

“We take advance money from the owner and work for him, it has been going on for years. On November 3, the owner had called Shehzad and detained him sensing that he might run away to save his life,” he said tearfully.

The allegation against the factory owner was repeated by two other witnesses interviewed by AFP, but denied by his son Khawar Yousuf.

“We don’t know what has happened, the family has been working for us for 20 years and we have never noticed anything bad.”

“It’s wrong to say that my father locked them up,” he added.

Malik Abdul Aziz, a cameraman who witnessed the event, said around 1,500 people gathered from nearby villages after being stoked up by local clerics who announced the couple had committed blasphemy over the loudspeakers of their mosques.

“They started beating the couple with sticks and bricks chanting slogans of ‘We will lay down our lives for the honor of the prophet’ and then tore off their clothes”, said Aziz.”The couple were screaming, begging for mercy and saying they have not committed any sin.”

“The mob dragged them for around 20 yards and laid them on top of the brick kiln oven and kept them there till they were burnt,” he added.

It was not clear whether they were already dead or burnt alive.

Blasphemy is a hugely sensitive issue in the majority Muslim country, with even unproven allegations often prompting mob violence.

Those who take part in the violence are rarely if ever prosecuted — a fact not lost upon the relatives of the deceased.

“I need justice but I am sure I won’t be able to get it, the clerics are too powerful,” Shehzad’s brother Iqbal said.

The National Commission for Justice and Peace, the human rights arm of of the Pakistan Catholic Bishops’ Conference, “strongly condemned” the killing of Shehzad Masih and Shama Bibi.

In a joint statement released Wednesday, National Director Fr Emmanuel Yousaf Mani and Executive Director Cecil Shane Chaudhry said the Pakistan government “has absolutely failed to protect its citizen’s right to life” and that its “lack of political will” leaves minorities vulnerable as “soft target[s]”.

They also demanded “serious and effective measures to check the violence in the name of religion” and called on the federal and provincial governments to “review their stand on the blasphemy law”.

Tahir Ashrafi, a member of the Council of Islamic Ideology, Pakistan’s top religious body, held police responsible for failing to act to protect the couple before the mob violence occurred.

“This case must go to an anti-terrorism court and the culprits must be arrested and punished, including the mullah (who made the blasphemy accusation in mosque) if he’s involved,” he said.

Most viewed articles
How to Read the Bible160
Words from St. Isaac of Syria112
Seven-day celebrations dedicated to the Saint who helped Bucharest during plague epidemic begin on Thursday110
Patriarch Kirill Encourages the Media to Report Proper and Adequate Information about the Church100
Holy Intercession Church in Glen Cove, NY, Celebrates its 70th Anniversary88
Since the Start of the Pandemic Moscow Priests Have Made Over 4,000 Visits to Patients with COVID-1978
Archbishop Peter of Chicago and Mid-America in an interview to Poltava Diocese’s press service reveals interesting moments in the life of St John (Maximovich)77
“Do Not Weep”23
Best Films of the Pokrov Film Festival Have Been Determined15
Using Our Time Wisely to Cultivate the Seeds of Faith2
Most popular authors
Pravmir.com team358
Archpriest Lawrence Farley160
Archpriest Stephen Freeman112
Aurelian Iftimiu110
Archpriest Peter Olsen23
Priest Luke A. Veronis2