On the sunday of the Samaritan woman

It is on this Sunday that the Church commemorates Christ's discussion during which Our Lord revealed His Divine identity to a simple women. During the Church service, as I listened to the Gospel narrative, I realized that through my mother, another simple women, the Lord had revealed to us, to her relatives and acquaintances, the mystery of death and life, and the profound meaning of faith in His Resurrection and in life eternal. Her experience of death revealed to us that, for the faithful, there truly was no death, but that rather, there was life in the bosom of Abraham.
Archpriest Andrew Phillips | 26 May 2008

In today’s Gospel, we see clearly how Our Lord combines within His Person two natures, the human and the divine.

On the one hand, we see that as a human-being, like all of us, He is wearied, thirsty and hungry. The Gospel tells us, for example, that when midday, the sixth hour, had come, His disciples left him to obtain food in the city and that Christ, thirsty, asked the Samaritan Woman for drink.

On the other hand, we see that He is also divine. Living as God in eternity, He knows the present, past and future of all. Thus as God He knows that the Samaritan Woman has already been married five times and that at present she is living in sin with yet another man. Also He tells her that He can give her ‘living water’ from an Eternal Well, and He tells the disciples that His ‘food is to do the will of Him that sent Me’.

As a man, Christ was a Jew, and His disciples are therefore astonished to find Him conversing not only with a woman, but with a Samaritan Woman. A Jew would never even have talked to a Samaritan, let alone a Samaritan Woman, for as the Apostle John says in his Gospel, ‘the Jews had no dealings with the Samaritans’. 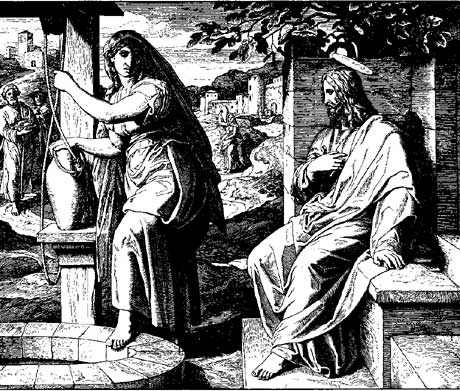 As God, however, Christ does not hesitate to talk to one who is able to accept Him as the Messiah, for the vocation of Christ is universal. ‘Salvation comes forth from the Jews’, but salvation is only for those who accept Christ and few were the Jews who did accept Him.

True, from the Jewish viewpoint, the Samaritans, Jews who had intermarried with pagans, were heretics; they had rejected the importance of Jerusalem and much of the Old Testament, including the Prophets; they had confused pagan idolatry with the Old Testament.

On the other hand, the Jews had rejected Christ. The Jews had turned the truths and revelations of the Old Testament into legalism and territorial racism, an arrogant, nationalistic and racist ideology; they had denied that Christ, as a man a Jew, could, as God, come for the salvation of all peoples. It is that ideology which still to this day insists on the ownership of Jerusalem and has brought even the contemporary world to the brink of war on several occasions. For the Jews had kept the letter of the Law but had rejected the spirit of the Law. And without the Spirit they were unable to recognise Christ.

The Samaritans had rejected the letter of the Law, but some of them, at least, did not stubbornly insist on their errors but were open to its spirit, for they were open to Christ, the Word of God, the Inspirer of the Law. Whereas the Jews had rejected Christ, the Samaritans kept Him with them for two days and many believed in Him. As Our Lord said on His return from Samaria to Judea, ‘a prophet has no honour in his own country’.

Why does the Church commemorate the Samaritan Woman today?
Because this is the first Sunday after Mid-Pentecost, the feast that stands half-way between Easter and Pentecost. At Easter the great truths of the Church are revealed – that Christ is both God and man, that He is crucified and risen from the dead. However, these truths, may remain rather abstract until at Pentecost we understand their inner meaning, their implications for our daily life. By the Coming of the Holy Spirit, these truths become living, and we worship Christ in spirit and in truth. Thus the Church reads to us the words that, ‘the hour is coming when the true worshippers shall worship the Father in spirit and in truth‘.

And this is why this world still continues today, why the world has not yet ended. Until the Gospel of Christ has been preached in spirit and in truth, that is, in Orthodox manner, in all lands, throughout the world, the world cannot end. For as long as there are new Samaritans, new peoples, new tribes to hear the Truth, as long as there are people who can still potentially become Orthodox, the world must continue, for there is harvest still to be reaped.

Let us this day pray that we too like the Samaritan Woman may bring others to the Church, testifying like Her to the Divinity of Christ, becoming reapers of that which we have not sown.

Holy Mother Photini, pray to God for us! 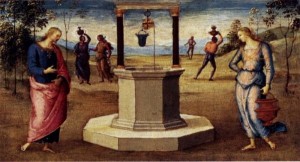