Orthodox Clergy, Faithful Took a Stand for Life Leading Up to Argentina’s Defeat of Pro-Abortion Bill 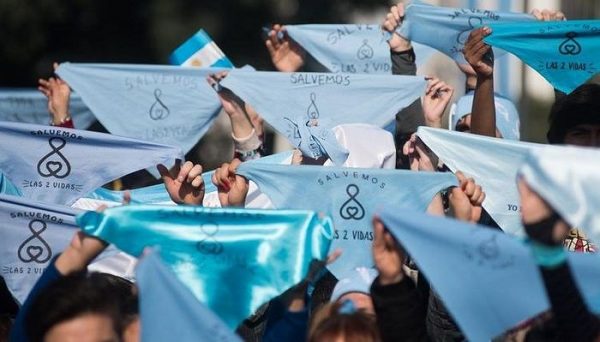 On August 9, the senate of Argentina defeated a bill that would have legalized the murder of children in the womb up to the 14th week of pregnancy. Consideration of the bill was accompanied by a wide public discussion, in which Orthodox hierarchs, clergy, and laity took an active part, reports pravoslavie.ru.

The South American bishops of the Serbian Orthodox Church and of the Russian Orthodox Church Outside of Russia came together on August 5 to offer their prayers that the great sin of abortion not become legal in Argentina. His Grace Bishop Kirill of Buenoes Aires, Central and South America (Serbian) and His Grace Bishop John of Caracas and South America (ROCOR) celebrated the Divine Liturgy together that day in the Serbian Cathedral of the Nativity of the Most Holy Theotokos.

They also signed a special “Declaration of the Orthodox Church Against Abortion,” which states in particular:

The Orthodox Church teaches that life begins from the moment of conception. As Orthodox, we believe that the Divine Logos Jesus came to be incarnate in a human body from the moment of His conception (Lk. 1:26-38); and that Elizabeth, the mother of John the Baptist and cousin of the Virgin Mary, testifies that the infant in her womb joyfully leapt when he heard the sound of the voice of the Virgin Mary (Lk. 1:44).

Abortion kills a living, helpless, innocent person, entitled to life. In addition, the embryo that is germinated in the mother’s womb is not part of the mother’s body, but is another body; it has its own DNA, and is therefore distinct from the mother. A mother cannot make a decision about the life of the child in her womb, because it is a different person, alive since conception, and, therefore, has the same right to live as does she.

The declaration expresses an understanding of the complexity of the problem in cases where the parents are unable to support the child or when it is an illegitimate pregnancy of minors. The Russian and Serbian hierarchs stress that both the family and the Church community and society as a whole should provide assistance to such parents and make every effort to avert their murder.

The same day, an Orthodox march with the participation of clergy and parishioners was held on the square in front of the Argentinian Congress. The people were carrying icons and banners reading “For Life,” depicting the meeting of the Theotokos with her cousin St. Elizabeth.

Most viewed articles
Patriarch Kirill: Not Only People, But Churches Too, Can Depart from God216
A Christianity of the Catacombs181
The Truth About Riches110
Thoughts on Theophany and Revelation105
Archbishop Makarios of Australia: ” the Great privilege of the Orthodox Church is that we live in communion”68
Metropolitan Onuphry Speaks on How to Protect One’s Soul From Sin47
Most millennials, Gen Z adults support bans on abortions when baby’s heartbeat is detected: poll27
How to live the Spiritual Life (Part I)1
Most popular authors
Pravmir.com team358
Archpriest Lawrence Farley181
Fr. Gabriel Bilas110
Elissa Bjeletich105