An Orthodox priest has been killed in the Donbas region (Ukraine)

Source: Pravmir.ru
Pravmir has been informed from the Horlivka and Sloviansk diocese that Father Pavel was not listed as staff of a particular parish, and there is no detailed information about the tragedy. It was also advised to be cautious of the on media’s attempt to connect Father Paul to one or another side of the region’s political conflict.
Natalya Mihailova | 10 May 2014 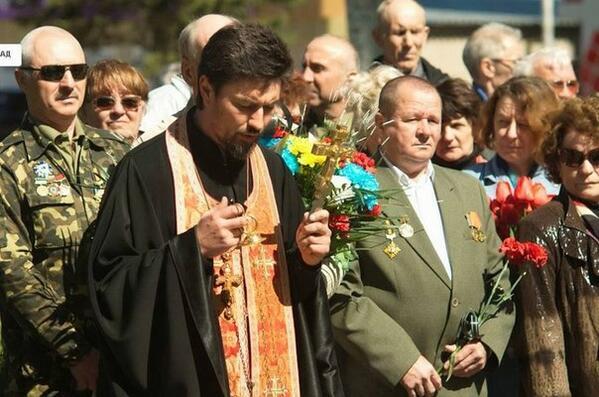 On the night of May 9th, close to Sloviansk, Archpriest Pavel Zhuchenko of the Ukrainian Orthodox Church (Moscow Patriarchate) was shot and killed. He served at the St. Dmitry Donskoy church in the city of Druzhkovka (Donetsk region). The circumstances of the priest’s death are unknown.

Pravmir has been informed from the Horlivka and Sloviansk diocese that Father Pavel was not listed as staff of a particular parish, and there is no detailed information about the tragedy. It was also advised to be cautious of the on media’s attempt to connect Father Paul to one or another side of the region’s political conflict. In the diocese, it was also advised to refrain from untimely canonizing the murdered clergyman: “The priest was dressed in civilian clothes. What exactly happened is currently being analyzed by the law enforcement authorities” – explained press-secretary of the diocese Svetlana Ohrimenko.

We ask for prayers for the repose of the murdered Archpriest Paul.

Most viewed articles
Glorying In Our Weaknesses153
The Cross, the Goo, and the Butterfly75
Conference “World Orthodoxy: Primacy and Conciliarity in the Light of Orthodox Teaching” Starts Today69
Bp Timotei: Orthodox Youth Association members are Christ’s “mystical disciples” who are not ashamed to profess Him51
St Alexander Nevsky Cathedral in Howell, NJ, Hosts Diocesan Celebrations of the 800th Anniversary of Its Patron Saint42
Timișoara: Midnight Liturgy and procession with relics on 65th anniversary of canonization of St. Joseph the New41
Will Everyone Be Saved?26
Metropolitan JOSEPH’S Encyclical for the Year of Youth12
A Noetic Life5
Most popular authors
Archpriest Michael Gillis153
Pravmir.com team111
Aurelian Iftimiu92
Fr. Jeremy75
Jacob Sparks26
Archbishop Joseph of New York and Metropolitan of All North America12
Archpriest Stephen Freeman4
Maria Trushanina1