Among the participants were representatives of the parishes of the St. Petersburg diocese, students of theological schools, and pilgrims.
Pravmir.com team | 13 September 2019 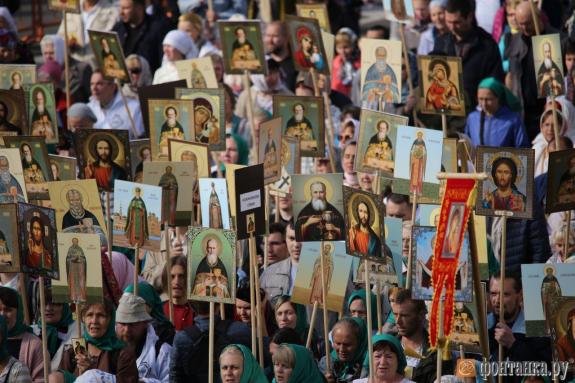 The citywide religious procession took place in honor of the 295th anniversary of the transfer of the holy relics of St. Alexander Nevsky in St. Petersburg on September 12, 2019. The cross procession was attended by 115 thousand people, reports Tass.ru.

The procession consisted of two groups: a large one from the Kazan Church and a small one from the Holy Trinity Cathedral of St. Alexander Nevsky Lavra. The first group proceeded along Nevsky Prospect with the Kazan Icon of the Mother of God. It was led by Metropolitan Barsanuphius of St. Petersburg and Ladoga. The second one passed with the saint’s holy relics. It was headed by the abbot of St. Alexander Nevsky Lavra, Bishop Nazarii of Kronstadt. The two groups met on the Alexander Nevsky Square, and a Service of Intercession took place.

“The event was attended by representatives of the clergy of the St. Petersburg diocese, students of the city’s theological schools, believers from St. Petersburg, numerous pilgrims from the Leningrad region and other regions of Russia. A delegation from Serbia headed by the Minister for Religious Affairs Miletu Radojevic also took part in honoring St. Alexander Nevsky,” it was reported.

The transfer of the holy relics of St. Alexander Nevsky was accomplished by an order of the Emperor Peter the Great. They were delivered from Vladimir to St. Petersburg from August 11, 1723 to August 30, 1724. The galley with the holy relics was met by the Nevsky fleet and Peter I personally. The emperor brought the galley to the shore, then carried the relics to the temple of the Holy Trinity Monastery established by him. A citywide procession in honor of the transfer of the relics was established in 1743 by Empress Elizabeth Petrovna. The tradition, interrupted after the October Revolution, was renewed during the celebration of the 300th anniversary of St. Alexander Nevsky Lavra’s foundation in 2013.