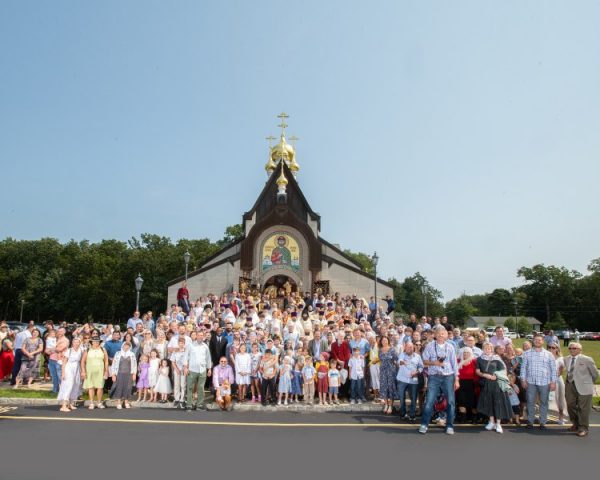 The church was built with the blessing of Archbishop Vitaly (Maximenko; +1960), the founder of the Eastern American Diocese and St. Vladimir Memorial Church in Jackson, NJ. Rather than take up an offer to build himself a summer home on land that had been donated to him, the archbishop – a monk of the old school – proposed forming a parish and building a chapel there. Thus, the first Russian Orthodox temple was built in this area, dedicated to St. Alexander Nevsky.

Having become rector in 1968, Protopresbyter Valery Lukianov – a civil engineer by trade – designed and built a grand new cathedral across the street from the old church, one that was able to accommodate a growing number of parishioners.

In 1994, when construction on the new cathedral was completed, the Synod of Bishops of the Russian Church Abroad blessed its consecration in honor of the Holy Right-Believing Great Prince Alexander Nevsky, while the old church across the street would be renamed in honor of the Tikhvin Icon of the Mother of God.

“These past 85 years, we have felt God’s grace, which we have received through the prayers of the holy saints,” said cathedral rector Archpriest Serge Lukianov, son of Fr. Valery, in an interview before the feast. “Everything that we have been able to achieve was done without the aid of banks or loans, solely through donations. The all-merciful Lord has not forsaken us, and we feel that this is due to the intercessions of our dear Saint Alexander Nevsky, who says to us: ‘Fear not, little flock, I am with you; only live according to righteousness.’ We try to live thus, and to pass this on to the next generations.”

Officiating the celebrations was Metropolitan Hilarion of Eastern America & New York, First Hierarch of the Russian Church Abroad, co-served by: Archbishop Gabriel of Montreal & Canada, Bishop Theoctist of Pereslavl & Uglich – in whose see the right-believing prince was born – and diocesan vicars Bishops Nicholas of Manhattan and Luke of Syracuse. The hierarchs served in crosses and panagias featuring an icon of St. Alexander Nevsky with the cathedral in the background – a gift from the parish. Concelebrating with the hierarchs was a large number of diocesan clergy.

A special joy for the participants of the feast was the presence at the divine services of the wonderworking icons of the Most Holy Theotokos – the Kursk Root and  myrrh-streaming Hawaiian-Iveron Icons. Deacon Nectarios Yangson, guardian of the Hawaiian Icon, spoke about its travels:

“It is a great blessing and honor to once again travel with the icon to the churches and monasteries. The holy icon was on the island [of Oahu] for about a year and a half; we had not left in that time… A few weeks ago, I got the call from the Mother of God that it was time to move and to move on, to leave the island and go out into the world. Since that time… everywhere we went, there were many people seeking the help and guidance and love of the Mother of God. Everyone needs her, we need her in the world, and she came at the most opportune moment, I think.”

Singing the festal divine services was the “Osanna” Youth Choir, under the direction of John S. Arlievsky.

A multitude of the faithful arrived from various states to celebrate the feast. Most of these communed of Christ’s Holy Mysteries.

Upon completion of Liturgy, the eminent guest – Bishop Theoctist of Pereslavl’ & Uglich – addressed the faithful with a sermon. His Grace reminded them, in part, that the Church calls on them to emulate St. Alexander Nevsky:

“He is an example for absolutely every person, both for commanders and warriors, as well as for family-oriented individuals and for every Orthodox Christian. The Church calls St. Alexander Nevsky a stronghold of confession and a willing martyr. And when we speak of firmness of faith, we can mean several things by things. Today we heard the Gospel reading about the rich young man, how he came to Christ with the question of how to inherit the Heavenly Kingdom. This episode is related in all three Synoptic Gospels. The rich young man was not prepared to reject his wealth and follow after Christ. And His disciples ask the Lord – who then can be saved? It would appear that the disciples had nothing that could be considered wealth, so why were they surprised? Because in the Jewish worldview of the day, ‘wealth’ was a person’s possessions, something that belonged to him irrevocably.

“We also have such possessions, unique for every one of us. There are not so very many wealthy people, but every one of us has something with which we are not willing to part – be that our education, our traumas, our cares. These are the things we have suffered for. And Christ’s disciples understood this well and were therefore astonished. To abandon everything we individually possess does not mean to give ourselves over to Christ’s will; after all, Judas abandoned everything, but did not become Christ’s, while Alexander Nevsky did. Remaining a prince, remaining a commander, remaining a family man, yet he was able to give himself over to Christ’s will, to become inseparable from Him, to the extent that that is possible for man.”

His Grace thanked the faithful for their shared prayer and wished for them all to learn from the experiences of St. Alexander Nevsky, that his life might be an example for all Orthodox Christians.

The clergy and faithful then went in procession around the cathedral with icons and banners. A group photograph was taken on the cathedral steps.

Archbishop Gabriel spoke briefly about the history of the cathedral and its rectors, for whom was intoned “Memory Eternal.”

Metropolitan Hilarion presented copies of the icon of St. Alexander Nevsky painted by Fr. Paul Drozdowski for the feast to Bishop Theoctist, to the rector of St. Alexander Nevsky Memorial Church in Richmond, ME, Archpriest Chad Williams and to his parish, to the guardian of the myrrh-streaming Hawaiian Iveron Icon of the Mother of God Deacon Nectarios Yangson, to John Arlievsky and the “Osanna” Choir, and to the organizers of the Russian-American Music Institute “PaTRAM” – Alexis and Kathy Lukianov and Tatiana Geringer.

“In my service at St. Alexander Nevsky Memorial Church in Richmond, I have been greatly humbled in my increasing awareness of the gifts that hundreds of thousands of warriors have given in their lives for their countrymen and especially for their Faith in Russia and all over the world,” Fr. Chad spoke to members of the Diocesan Media Office after the service. “As we struggle in this day and age to maintain our Orthodox Faith in the onslaught of modernism, atheism, and neo-paganism that confront us on all sides, St. Alexander Nevsky stands as a spiritual giant, with his zeal to protect his people and to preserve the Faith for his family and his homeland… May we stand strong through the prayers of our blessed father and protector, St. Alexander.”

In turn, Bishop Theoctist presented particles of the relics of Venerable Daniel of Pereslavl’ to each of the other bishops, as well as to St. Alexander Nevsky Cathedral, as a gift.

As parishioners and guests approached the cross, they were given cotton saturated with myrrh from the Hawaiian Icon, as well as copies of the Hawaiian Icon and that of St. Alexander Nevsky.

A banquet was organized in the cathedral hall for the clergy and faithful, during which singers of the “Osanna” choir performed a concert. An exhibit was featured including projects by Russian school students who had taken part in a competition in honor of the 800th anniversary of St. Alexander Nevsky, organized by the Otrada Society. Three students from the local Russian parish school received prizes, which were presented to them by Metropolitan Hilarion: Nika Berg, Sophia Korotin, and Andrew Melikhov.

At the same time, a dessert buffet was offered for the faithful in the cathedral’s lower hall, while a picnic was set up in Nevsky Park. Russian music was performed by a professional duet: Yuri and Ilona Bogatkevich, while Cossacks from various voiskos performed traditional Cossack entertainments.