Source: Vatican Radio
Natalya Mihailova | 31 January 2017
A Pakistani court acquitted 112 suspects in the 2013 torching of hundreds of Christian homes in the eastern city of Lahore over a rumour that one of the residents there had blasphemed, a lawyer said on Sunday. 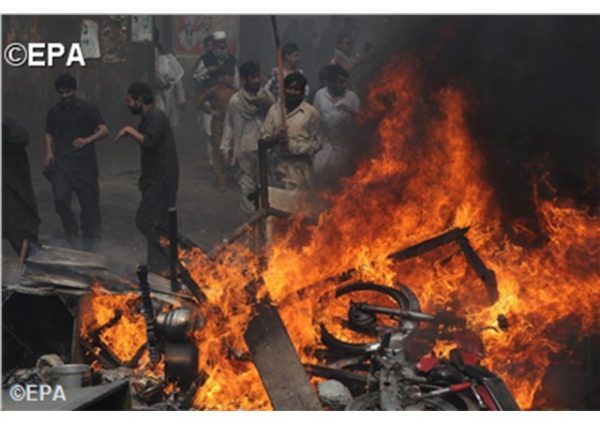 In March 2013, more than 125 homes in Lahore’s Josep Colony were burned by a mob of more than 3,000 Muslims responding to rumours that a local Christian man, Sawan Masih, had made derogatory remarks about the Prophet Mohammad.  No one was killed in the incident but there was widespread damage to the property of the mostly destitute Christians living in the neighbourhood.  Two churches and dozens of Bibles were also desecrated in the attack.

Defence lawyer Ghulam Murtaza Chaudhry said an anti-terrorism court in Lahore had acquitted 112 people accused of torching and ransacking hundreds of houses, “because of lack of evidences against them.”  All 112 suspects were already out on bail.

Sawan Masih, a Christian road sweeper in his late twenties, told police after his arrest on blasphemy charges that the real reason for the blasphemy allegation was a property dispute between him and a friend who spread the rumour.  In Pakistan, conviction under the blasphemy laws can carry a mandatory death sentence.  Masih was sentenced to death in 2014, a decision he has appealed.  Critics of Pakistan’s blasphemy laws say they have long been used by individuals and religious groups to settle disputes.

This month, the Pakistani Senate’s human rights panel said it would debate how to prevent the country’s blasphemy laws being applied unfairly, the first time in decades that any parliamentary body had considered a formal proposal to stop the abuse of the blasphemy laws. Many conservatives in Pakistan consider even criticising the laws as blasphemy.

A Christian woman, Asia Bibi, is in jail for 7 years on charges of blasphemy.  She was sentenced to death in 2010 for insulting the Prophet Muhammad, which she has denied.  Pakistan’s Supreme Court adjourned her death row appeal on October 13 last year, after one of the 3 judges recused himself from the case.  Christian minorities minister Shahbaz Bhatti and Muslim politician Salmaan Taseer, the governor of Punjab Province, were both assassinated in 2011 for advocating on her behalf and opposing the blasphemy laws.  (Source: Reuters)