Patriarch Daniel: “The Sinner and the Sick Must be Forgiven and Healed without Humiliating Them”

Source: Basilica.ro
His Beatitude Patriarch Daniel of Romania | 22 May 2019 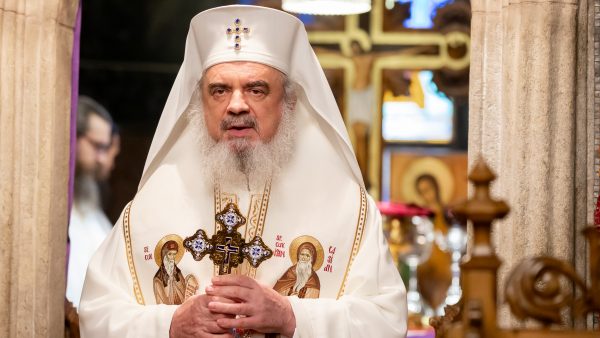 Photography courtesy of the Basilica.ro Archive

Praising the discretion and wisdom of the Saviour who healed the paralytic at the Pool of Bethesda, His Beatitude Patriarch Daniel pointed out that the one who sinned and is sick must be raised up and helped to be a new man among people without humiliating him.

The sick man at the Bethesda pool (John 5:1-15) suffered for 38 years because he had sinned, His Beatitude noted at the end of the Divine Liturgy celebrated Sunday, May 19, 2019, at the Chapel of Saint George of his patriarchal residence.

‘In a very discreet way, the Saviour Jesus Christ does not tell the world what was the sin he made,’ the Patriarch said adding that Christ ‘does not rebuke the sick, but He first heals him.’

The patriarch noted that when Jesus saw the sick man going to the temple to thank God, Christ met with him and whispered to him ‘discreetly, face to face, See, you are well again. Stop sinning or something worse may happen to you.’

‘Jesus Christ does not give this advice in public,’ the Patriarch of Romania stressed, ‘but in secret, thus maintaining a confidential relationship between the physician-spiritual father and the patient-penitent.’

‘We see here the mode of a spiritual conversation between a physician of souls, who is the spiritual father, and the penitent or the man who repents for his sins wishing to be cured of sin and sickness.’

His Beatitude noted that through this miracle Christ shows us ‘His healing power, His spiritual wisdom and guidance offered in His capacity of Physician of souls, as a consummate spiritual father.’

‘From this, the Church understood that confessing sins in front of the spiritual father and offering advice to the one who confesses happens in secret. Why? Because Christ the Lord teaches us that when a man is a sinner and sick, he must be forgiven, healed, and helped to raise up without being humiliated in front of others,’ Patriarch Daniel highlighted.

‘Jesus keeps silent. He is a discreet, not a spectacular healer.’

‘He does not seek human glory, but He heals and raises the sinner and the sick bringing joy, granting mercy, the power to be a new man among humans, to be sufficiently healthy to return to his home,’ the patriarch explained.

The liturgical period between Pascha and the Ascension of the Lord is ‘a pedagogy of spiritual recovery and ascension in the light and joy of the Resurrection of the Lord,’ His Beatitude said explaining the context of the Paschal cycle.

During the Paschal cycle, the patriarch explained, we are showed that the work of God aims at forgiving sins, healing human sicknesses and sufferings.

The Romanian Patriarch presented four important teachings related to the healing of the paralytic at the pool of Bethesda.

The first teaching is that Jesus Christ voluntarily goes to the pool of Bethesda to heal the man who had an infirmity for 38 years and he was still paralyzed because no other person helped him to enter the healing pool.

‘Even though there were many people, no one helped him. The God-Man went to help him.’

Second, knowing the paralytic’s ambition, Jesus healed him on a Jewish holiday, that is on Sabbath. He did this ‘to show that people in suffering must be helped at any time and that good must be done every day.’

Third, after the healing, the former paralytic went to the temple to thank God and witnessed boldly to the Jews that Jesus Christ had healed him.

‘There he met Jesus who told him directly and discreetly, See, you are well again. Stop sinning or something worse may happen to you.’

Fourth, Jesus Christ is the Physician and Spiritual Father who heals both soul and body.

‘Through his merciful love, the Lord Christ heals the sick, forgives the sinners, and desires that every human may be saved.’

From physical suffering to spiritual recovery

Ending his homily on the fourth Sunday after Pascha, Patriarch Daniel pointed to the fact that physical suffering can help to gain spiritual recovery.

‘This man who repented through suffering was chosen by Christ the Lord to show us that a sick person can profit from physical suffering to gain spiritual health,’ the patriarch said.

Patriarch Daniel urged everyone to pray for the sick and suffering so that Christ may give them hope for healing and salvation.

On Cheesefare Sunday, His Beatitude Patriarch Daniel of Romania said that ‘fasting is an offering of man’s love…