The name of Archbishop Ieronymos II was not mentioned during the singing of the “Wish For Long Life“ diptych to all the Primates of the Local Orthodox Churches.
Pravmir.com team | 03 November 2019 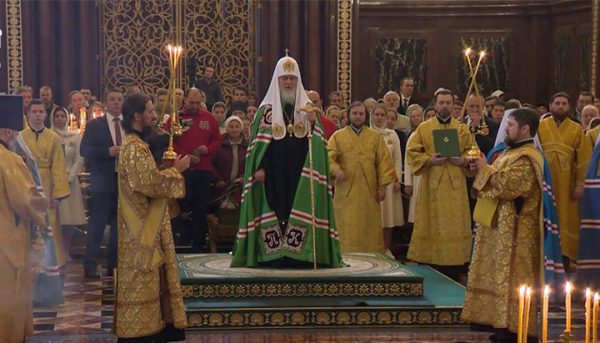 Primate of the Russian Orthodox Church, Patriarch Kirill of Moscow and All Rus’. Photo: YouTube

His Holiness, Patriarch Kirill of Moscow and All Russia, did not mention the head of the Greek Church during a Sunday service at the Cathedral of Christ the Savior in Moscow on November 3, meaning that Eucharistic communion with the archbishop of Athens has been stopped, reports “RIA Novosti” and Interfax-Religion on their pages.

The name of the current archbishop of Athens has been removed from the diptych (the order in which archbishops are mentioned during a religious service) of the Russian Orthodox Church.

At the same time, members of the Synod decided to maintain prayer communion with those Greek bishops who spoke out against the recognition of the so-called “Orthodox Church of Ukraine” – the new church structure recently created in Ukraine – but to cease it with those who recognized the OCU.