Russian Holy Synod: We Will Stop Commemorating Greek Primate if He Begins to Commemorate or Recognize Schismatics

Source: OrthoChristian
Pravmir.com team | 17 October 2019
The hierarchs also “cease prayerful and Eucharistic communication with those bishops of the Greek Church who have entered or will enter into such communication with representatives of the Ukrainian non-canonical schismatic communities.” 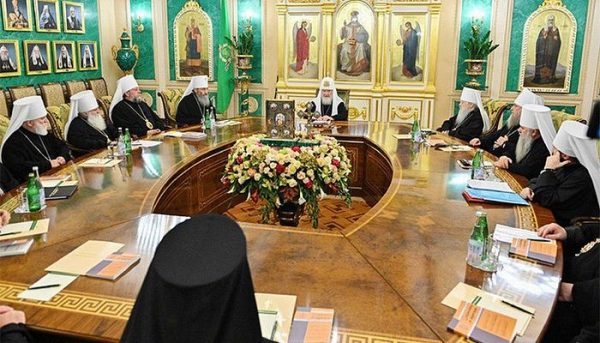 The members of the Synod examined various documents concerning the Bishops’ Council, including the official communiqué published by the Greek Church and the report of Archbishop Ieronymos of Athens and All Greece, in which he recommends that the Greek Church recognize the schismatic “Orthodox Church of Ukraine.”

The official statement from the Russian Holy Synod notes that the Russian Church has repeatedly informed the hierarchs of the Greek Church about the persecutions against the canonical Ukrainian Church resulting from Constantinople’s interference there and that on October 9, just 3 days before the Greek hierarchs met, Pat. Kirill addressed Abp. Ieronymos with a fraternal message, calling on him not to make any unilateral and hasty decisions, but rather to wait until the Holy Spirit gathers the primates of the all the Local Churches together to solve the problem in a spirit of unity and conciliarity.

“It is sad that his Beatitude Archbishop Ieronymos bases the necessity of hasty and unilateral recognition of the non-canonical schismatic community on a number of erroneous and false arguments repeatedly refuted not only by the hierarchs, scholars and theologians of the Russian Orthodox Church, but also by many prominent archpastors, pastors and theologians of the Greek Orthodox Church,” the statement reads.

The report goes on to examine the many faults of Abp. Ieronymos’ report that he presented to the Bishops’ Council and recalls the stance of several Greek hierarchs who have openly spoken against taking any action regarding the recognition of the OCU, calling instead to convene a pan-Orthodox council to examine the matter.

The Synod also notes the confusion caused by media reports that the Greek Church recognized the OCU, which is not supported by the text of Greek communiqué, and that no vote on the matter of recognition even occurred at the meeting of the Greek bishops. Thus there are serious concerns that the Orthodox Church’s conciliar way of making decisions was violated.

“If the Ukrainian schism is truly recognized by the Greek Orthodox Church or its primate—in the form of a joint service, liturgical commemoration of the leader of the schism, or sending him official letters—it will be a sad testimony to the deepening division in the family of Local Orthodox Churches,” the Synod continues.

“The full responsibility for this division will fall, first of all, on Patriarch Bartholomew of Constantinople and on those external political forces in whose interests the Ukrainian split was ‘legalized,’” the report further reads.

However, geopolitical interests “will not destroy the centuries-old friendship of the Greek and Slavic peoples, paid for with the blood of Russian soldiers and hardened in the common struggle for the freedom of the fraternal Greek people.”

The Russian hierarchs “cherish the prayerful communion with our brethren in the Greek Orthodox Church and will maintain a living prayerful, canonical and Eucharistic connection with it—through all those archpastors and pastors who have already spoken out or will further oppose the recognition of the Ukrainian schism, who will not stain themselves by concelebrating with the schismatic false hierarchs, but will show an example of Christian courage and firm stand for the truth of Christ.”

The Russian Synod’s statement concludes: “The Holy Synod of the Russian Orthodox Church authorizes His Holiness Patriarch Kirill of Moscow and all Russia to stop commemorating the name of His Beatitude the Archbishop of Athens and All Greece in the diptychs if the primate of the Greek Church begins to commemorate the head of one of the Ukrainian schismatic groups during Divine services or takes other actions testifying to his recognition of the Ukrainian Church schism.”

Most viewed articles
Into the Heart of the Capitol201
Admitting That We Hate153
Number of Christians Murdered for Faith Rose 60 Percent in 2020: 50 Most Dangerous Countries to Be a Christian150
Funeral for Metropolitan Philaret Held in Minsk100
Building a Fire and Preparing for Theophany76
Churches to Reopen in Greece on January 1840
Homily on the Circumcision of Our Lord Jesus Christ38
God Is With Us… And Nothing Else Matters16
I Have Fought the Good Fight, I Have Completed the Race7
Most popular authors
Archpriest Stephen Freeman201
Archpriest Michael Gillis153
Charlene Aaron150
Pravmir.com team139
Fr Gregory Scratch76
Protopresbyter George D. Konstantopoulos38
Fr. Gabriel Bilas16
Metropolitan Hilarion (Alfeyev)7
Maria Trushanina1