Patriarch Kirill: When Freedom Destroys God’s Plan for the World and Man it Becomes Slavery

Without changing the situation for the better in the business community, without increasing the moral approach to deciding professional objectives, we will have constant problems.
Patriarch Kirill of Moscow and All Russia | 03 April 2014 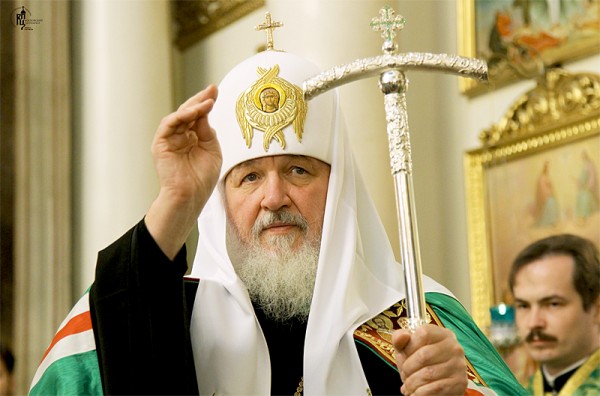 On March 28, 2014, a meeting between His Holiness, Patriarch Kirill of Moscow and All Russia, and women entrepreneurs from forty regions of Russia – members of the “Women of Business” All-Russian social organization – took place in the St. Sergius Hall of the Cathedral of Christ the Savior in Moscow.

Business is a realm that requires dynamism and passionarity. People go into business that are capable of taking risks and achieving their goals; in this sense, those who are effectively engaged in business constitute, undoubtedly, a certain social elite. And inasmuch as today any public activity depends on economics, on finances, then it is quite obvious that lack of economic success – including success in business – entails the reduction of social activity in the community.

An enormous amount of humanitarian and cultural programs and many lines of serving the Church are, one way or another, fueled by the results of entrepreneurial activity. Strictly speaking, this was always the case in pre-revolutionary Russia: merchants fed the economic might of our state; churches and monasteries were built and towns and villages were equipped at their expense. May God grant that this tradition not cease and that today the same thing would come about.

I would like to express gratitude for the attention that many of you have shown to the activity of the Russian Orthodox Church by directly or indirectly participating in programs that we are realizing today. And the Church today really does perform a very large number of socially useful activities.

Thus, about a year ago I had the opportunity of meeting with the leadership of the State Anti-Drug Committee, Mr. Ivanov and his team. It was from him that I first heard that there are thirty times more church shelters for the rehabilitation of drug addicts in Russia than there are state shelters, moreover with a very high level of rehabilitation: sometimes more than 60%. Who is supporting this effort financially? Of course, the money comes from business, through our benefactors or, as they put it now, our sponsors.

Our era is associated with the destruction of many values in human life. Over the past 300 to 400 years, mankind has undergone enormous changes of a revolutionary character. At the center of the religious understanding of life is not man, but God. Why was Rus’ called Holy Rus’? Because the main value-dominant was God, and human sanctity was seen as a result of the recognition that God was central. The hero of those days was the saint, which is why our literature began with the lives of the saints. It was literature about heroes; and the ideal of holiness as the absolute idea of life went deeply into our nation’s flesh and blood, as it did into European civilization in general. However, revolutionary transformations have changed the situation: at center is man with his needs, and the hero has become he who maximally satisfies these needs, who has the most financial opportunities.

When I say this, I do not mean to say that doing business is bad. But I do want to emphasize that if we place ourselves at the center of life and forget everything else, we will be very vulnerable. We will be plunged into conflicts. Perhaps we have more money now than before, but have not become any happier…

Happiness is where God is. If one lives in recognition of this, one can engage in anything one likes, except crime: business, politics, or plowing the land; one can be more or less rich, but one will have the fullness of life, because human happiness is not the result of human activity. You will not create happiness with your own hands. Happiness is always a gift of God, and there can be no Divine gift if you exclude God from your life. One needs to remember this, and then everything will come together correctly: success and business, money and prosperity.

The destruction of traditional values today also affects interpersonal relationships. We know that even the fact that marriage is a relationship between a man and a woman is challenged, that gender selection is not an intellectual or volitional choice, but God’s gift. Children are already being taught this, being told: “You yourself can choose whether you are a boy or a girl,” that is, people destroy that which has been established by God, seemingly in the name of freedom. But what then is freedom? If freedom destroys God’s plan for the world and man, then it is not freedom, but slavery. And we know that the devil is ensnaring man, because the most frightful lack of freedom is lack of freedom of sin, when man cannot live in accordance with his vocation.

Why am I speaking to you about this? Because women bear a great responsibility. Women are more sensitive; they feel many things more finely than men. It is no accident that women are keepers of the hearth; and it is on the state of morals, the keepers of which women should be, that the existence and wellbeing of society depends.

This is why the preservation in our society of Christian – or, I would say, religious – values (because in this case we are talking about common religious values) are the key to our future prosperity. If we want to be happy, we need to live in accordance with that which God has willed and to stand up for what He Himself has offered to us as vital programs.

And now a few words about business. It was not by chance that I began with the moral side. One cannot be a moral person in one regard and immoral in another. Morality is a derivative of the integrity of the human person. The fact that today there are very big problems in business is connected with the lack of a moral approach, which is very dangerous. The concentration of money in moral iniquity is very explosive. When one lives immorally, but has no money, one can cause damage to oneself, to one’s family, and perhaps to one’s neighbors. But where finances are greater, it can spread to millions of people. And in fact, it does. After all, we do know, for example, that people who have money control the mass media; and if the mass media spreads things that are dangerous for one’s moral life, if it spreads dangerous political myths, if it provokes clashes between peoples, then millions of people can fall under this propaganda. This is just one example.

Because where there is money, there is authority, there is power, which means that it is very important to preserve the moral sense there. And to whom should one address these words, but to women who are engaged in business? Our business has a significant component of corruption, there is a criminal component, and therefore there is more hope for women who run businesses, inasmuch as women by nature are more sensitive and capable with greater coherence of defending the moral approach to business than many of their male counterparts.

Without changing the situation for the better in the business community, without increasing the moral approach to deciding professional objectives, we will have constant problems. Whatever we might say, we are always cognizant of the fact that corruption and criminality destroy economic potential and hinder the development of the country. It is really so. Therefore I would like once again to emphasize that I am glad to meet you, and I would like to tell you that I naturally have hope for female business leaders. Given the special status of the female soul and women’s special responsibility for the family and the human race, one can appeal to women with a greater degree of confidence that they will accept one’s words.