Source: DECR
Natalya Mihailova | 21 March 2016
On 17 March 2016, His Holiness Patriarch Kirill of Moscow and All Russia met with the President of the State of Israel, Mr. Reuven Rivlin. 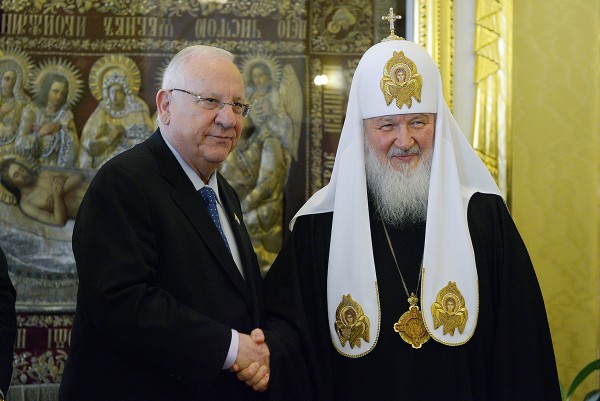 They were joined in the meeting, which took place at the Synodal residence in St. Daniel’s Stavropegic Monastery, by H.E. Zvi Heifetz, Ambassador Extraordinary and Plenipotentiary of the State of Israel to the Russian Federation; Mr. Harel Tubi, director general of the President’s chancellery; Ms Rivka Ravitz, chief of staff to the President; Mr. David Saranga, senior foreign affairs advisor to the President; Ms Mira Ratzabi, senior advisor to the President; Ms Naomi Toledano, press secretary of the President; Ms Roni Elon Frajnd, head of the strategy and politics department; Mr. Alex Goldman-Shayman, plenipotentiary minister, deputy head of the diplomatic mission of the Embassy of the State of Israel in the Russian Federation; Ms Yelena Margovsky, economics advisor; and Ms Daniela Grudsky-Ekstein, first secretary of the Embassy.

His Holiness Patriarch Kirill warmly greeted the high guest and said he was glad to meet him to exchange opinions on the situation in the Middle East and our bilateral relations regarding religion. 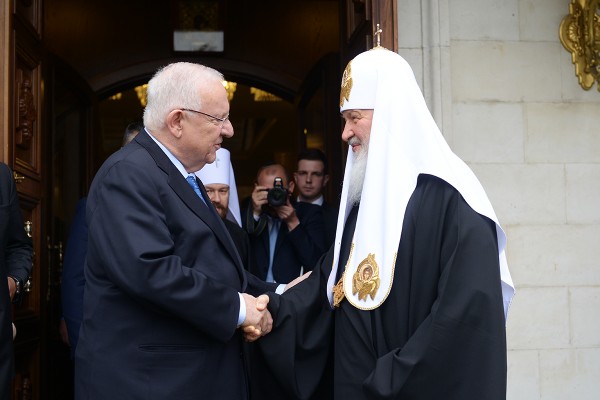 Russian people have special feelings to the Holy Land, His Holiness said and added: ‘The fact that over a million people in Israel speak Russia creates a special atmosphere for the pilgrims. They often feel at home in Israel.’ His Holiness noted the importance of the visa-waiver agreement between the State of Israel and the Russian Federation.

‘Our attitude to the Holy Land dates back to the olden times, as pilgrims used to go there for centuries. The Russian Ecclesiastical Mission was established in Jerusalem in 1847 to render assistance to the pilgrims and conduct research study on the Holy Land. We follow with great attention all events in Israel and we share anxiety over terrorist attacks and the danger of them. Progress in the peaceful settlement of the Middle East problem, particularly in the relations between Israel and Palestine is very important to us.’

The Primate of the Russian Orthodox Church believes that a broader involvement of religious leaders in this dialogue will be helpful. ‘Maybe it would be reasonable to set up a platform for interreligious dialogue on the Middle East settlement, and first of all on the achievement of peace in the Holy Land.

‘We are worried about what is going on in the Holy Land, in Syria and Iraq. You certainly know about the catastrophe for the religious minorities caused by the terrorists. We see the real genocide in the Middle East, particularly against Christians.

His Holiness noted that he had brought up the topic many times at his meetings with the state leaders and heads of the states. Other religious and public leaders as well as politicians also took up this theme, yet the situation of Christian communities now on the brink of elimination in certain Middle East countries still stays out of attention of the world community. ‘Pope Francis and I decided to meet and emphasize the tragedy of Christians in the Middle East. It seems to me that our common voice has been heard.’ 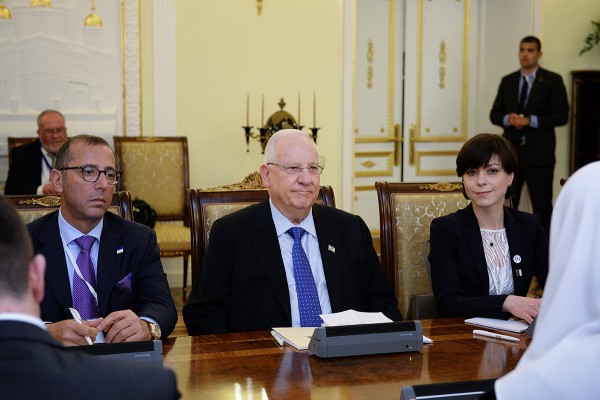 While talking about the settlement in Syria, His Holiness underscored: ‘I believe that the coordination agreement between the US-led coalition and Russia is very important as it has pushed away the danger of a big war that could have been sparked due to certain incidents. When the two strong military forces are waging campaign in a restricted locality, the risks are high. It seems that now the risks have been removed.’

His Holiness welcomed the recent resolution of the US Congress that called the killing of Christians in the Middle East a genocide.

Patriarch Kirill told the guests that representatives of different religions in Russia, including Christians and Jews, maintain peaceful relations in Russia. ‘For instance, we cooperate in the Interreligious Council of Russia and often enough join our voices in discussing very important issues related to lawmaking and in dialogue with the governmental authorities.’

His Holiness stated that relations of the Russian Orthodox Church with the Muslim communities in the Russian Federation were good. ‘Recently there appeared radical groups whose actions are rather dangerous, and we appreciate the official position of the Islamic leaders in Russia as they distance themselves from the radicals and denounce them.

‘We, the Orthodox, the Jews, and the Muslims have been together for a thousand years, and have developed calm relations in our everyday life. Our task is to maintain normal human relations among different religious groups.’

The President of Israel said he was glad to meet and talk with the Primate of the Russian Orthodox Church.

As to the Palestinian crisis, President Rivlin believes it needs resolution. The high guests spoke of the acute situation in some countries of the Middle East. He said that Christian communities are facing great dangers, but they are protected in Israel and feel free. ‘As the President and a resident of Jerusalem I want Christian communities to flourish. Freedom of religious belief is guaranteed in our country all people, including pilgrims. Many pilgrims come to Israel, and pilgrimage helps to develop trust-based relations among Christians, Jews and Muslims in the country,’ he added.