Patriarch Kirill: “Talks about Recognition of the Schismatics ‘Under Pressure’ Raise a Smile”

Source: Orthodox Life (Russian)
The Russian Church has gone through prisons and the Butovo firing ground, but never knelt before the earthly powers.
Pravmir.com team | 21 November 2019 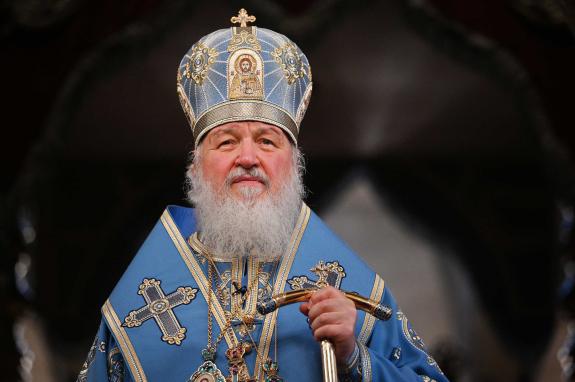 His Holiness, Patriarch Kirill of Moscow and All Russia, delivered a sermon after the Divine Liturgy at Christ the Savior Cathedral on November 20, 2019, reports Ria.ru. He mentioned that talks about diplomats and politicians pressuring some Orthodox Churches to recognize the Ukrainian schismatics only raise a smile.

“What we witness today is not the result of the Churches’ initiatives. It is a result of the fact that some Churches failed to withstand the pressure. This is what Primates of the Churches told me directly, “we are being pressured”, “we were pressured”. I answer to this, ‘You should not speak about pressure here in Russia’. We went through such pressure during the entire 20th century. Our ancestors did not just go through difficult talks with those in power, they went through prisons, camps and the Butovo firing ground. However, the Russian Church has never knelt to those who pressured her,” – stated the Primate of the Russian Orthodox Church.

His Holiness, Patriarch Kirill, admitted that today “no one pressures our fraternal Local Orthodox Churches in this way”. But for a number of Primates and hierarchs “life in a calm atmosphere has created a certain impression of prosperity”. As a result, “some could not ignore even such diplomatic pressure, which was definitely put on a number of the Churches, primarily Greek ones.”

“Therefore current allusions towards the Russian Church from some fraternal Greek Churches is the result of precisely this pressure,” the Primate of the ROC noted.

He expressed his sorrow that some Greek Churches “have succumbed to persuasion of inferior officials.” The Patriarch said, “It simply brings a smile to my face. So some deputy came and put pressure on a Patriarch and the Patriarch could not do anything. Do you know how many deputies are there to influence Patriarchs? But what then is our shared responsibility? As Heads of Churches to preserve the unity of Orthodoxy?”

According to His Holiness, Patriarch Kirill, people put pressure on the Orthodox Church “mainly in order that a schism appeared between Greek Orthodox and the Slavic world.” “We should do all in our power to not let these evil plans, which are absurdly carried out by the way, in no case to break the unity of the One Holy Catholic Apostolic Orthodox Church,” concluded Patriarch Kirill.

He also thanked the clergy for the unanimity and support of their Primate, who “due to his position is on the cutting edge of this struggle and these contradictions.”

Most viewed articles
What Is Rejected Becomes the Cornerstone121
Hierarch of the Jerusalem Patriarchate Speaks in Support of His Holiness Patriarch Kirill92
The Forgotten Virtue of Stability90
Utah Church Prepares, Welcomes All for Consecration89
His Beatitude Patriarch Theophilos III and bishops of the Russian Church Abroad attend a concert marking the 150th anniversary of the birth of Sergei Rachmaninoff in Jerusalem86
The Savior of the Hopeless, or Is It Possible to Be a Good Person and Not Be Saved?73
Supreme Court Overturns Roe v. Wade in Mississippi Abortion Ruling66
‘The post-Roe generation’: Pro-lifers set their eyes on heartbeat bills, chemical abortion bans64
Most popular authors
Pravmir.com team267
Archpriest John Moses (+2019)121
Hieromonk Gabriel90
Alexander Tkachenko73
CBN News66
Ryan Foley64