In honor of the fifth anniversary of the Patriarch’s enthronement, we have chosen twenty lucid fragments from his sermons, speeches, programs, and interviews. We will offer four selections a day for the next five days.

“The religious understanding of power is associated with service. Before God there is no meaning in human power; there is only one meaning: service. That is why authentic power is also associated with responsibility and struggle [podvig]. This includes spiritual struggle. Because serving one’s neighbor, serving people, is always a matter of the giving of yourself. And, in some cases, crucifying oneself for the good of those whom you are called to serve.

“This is why serving in power requires enormous spiritual and physical strength, wisdom, patience, strengths, and humility. One who relies only on his physical and mental strengths and his will power is not fully able to perform this Divine mandate for all those who take power.”

(Address to President Yanukovych of Ukraine on February 25, 2010.) 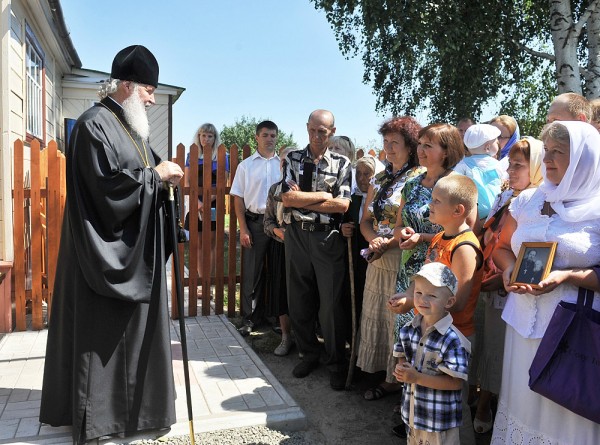 “My thoughts regarding human freedom came down to the following: in and of itself, freedom is a great gift of God; in and of itself, freedom is the ability to chose. God did not program us for good – by the way, that often destroys faith in people who say: ‘Why does God not punish sinners? Where is God, when such things happen: wars and crimes?’ God did not program us for good in the same way that we set an alarm clock for a given time. He could have done this; He could have created an amazing community of happy and holy people. But then these people would not have been holy and happy by their own choice, but by the program embedded in them. The image of God would not be in them; they would have been created otherwise. But God desired to create us according to His image, to imbed in us the breath of His life. This led to the fact that man has the ability to choose.”

What happens if labor is detached from moral principles? More often than not, such labor has the making of profit as its goal. All moral and even legal violations in the sphere of labor take place when labor is used for the making of profit that goes towards the egotistical satisfaction of human needs. Such labor ceases to be grace-filled; it ceases to be an expression of love, that is, of a desire to give oneself to a good cause. And when such labor has a place, its results more often than not do not bring benefit to human society.”

(Meeting with the staff of the Ural Mining and Metallurgical Company on April 16, 2010.)

4. On the Blogosphere and Mission on the Internet

“We are not, after all, going to reproach the Apostle Paul for the fact that he developed doctrine using correspondence. Everything that the Apostle Paul created was in the form of letters. We are not going to reproach the Holy Fathers, ascetics, and ascetic strugglers at whose legacy we now marvel because many of their works are also in the form of letters. Now priests and theologians have the ability to transmit in written form their thoughts, to share their spiritual experience, and to respond to other people’s perplexities, including in polemics. This, of course, is an enormous challenge, because when a priest signs his full name, when everyone else knows what this priest is saying, then his responsibility is very high. Therefore I call upon the clergy to participate in all this modern life, in this exchange of information, but only with a very high sense of responsibility. One cannot simply chat on the Internet, one cannot submit one’s own personal ideas in such a way that people perceive them to be the thought of the Church. Therefore, on the one hand I call upon the clergy actively to use these new envelopes for correspondence; but, on the other hand, given the rise in responsibility, to prepare themselves very seriously both in the spiritual and in the intellectual sense for participation in work of this kind.”