Patriarch Meets the Little Girl He Previously Asked to Have Adopted 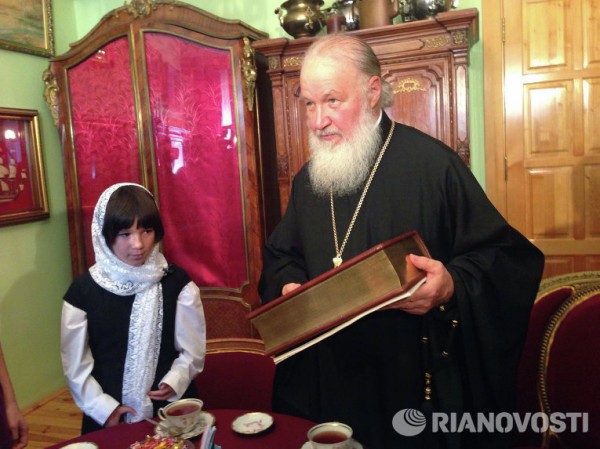 PRAVMIR. September 3, 2014. Patriarch Kirill of Moscow and All Russia, while visiting the Pskov-Caves Monastery, met with the little girl whom he asked to have adopted this past winter.

At the Children’s Christmas Tree celebration this year, His Holiness met Mila, who sent him a letter in which she wrote about her desire to have a family. These people were found and the little girl was adopted by Olga and Igor Filimonov. After the Patriarch’s appeal that some family adopts Mila, fifteen families expressed their desire to do so, according to Patriarhia.ru.

The meeting was held in the house of the monastery’s abbot, and was attended by Mila’s foster parents and her grandmother, Alevtina Kachkina.

“I am truly happy that Mila has found a family. We know this family very well,” said His Holiness as he blessed the crowd.

His Holiness, Patriarch Kirill, presented Mila and her parents with gifts, including an icon of Christ the Savior and the Holy Scriptures.

Mila is now studying in Moscow’s Dmitriev secondary school and is being brought up in a family of graduates from the special Foster Parent School at the Martha and Mary Convent of Mercy in Moscow.