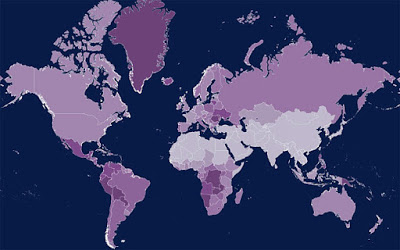 We often hear from atheists how religion is dying out as mankind comes to see the clear light of reason.
Atheist “intellectuals” speak disparagingly about religion and predict that mankind is on the cusp of a new age in which religion will simply disappear as science, technology and reason are in the ascendant.
The facts indicate exactly the opposite. It is religion which continues to grow around the world while the statistics indicate that agnosticism and atheism are dying out.
A new report chronicled here by Pew Research at the Daily Telegraph tells a very interesting story.
While the numbers of those who are “religiously unaffiliated” is predicted to rise in Western Europe and the United States, in global terms their numbers are shrinking as Christianity and Islam continue to wrestle for spiritual domination in the world.

According to the Pew Research Centre, the religiously unaffiliated – referring to atheists, agnostics and other people who do not identify with a religion – are declining as a share of the population.Sixteen per cent of the population was unaffiliated to a religion in 2010 and Pew predicted by 2050, this would fall to 13 per cent, mainly because individuals in this group are older and have less children.

The huge growth rate will be among Christians in Africa.
Furthermore, while the rise of Islam is looked on with dismay, by 2050 Christianity will still be predominant

It is widely known that Islam is increasing globally but despite this increase, by 2050, only two more countries (51 in total) will have a population of Muslims that is more than 50 per cent.

According to the projections it is not until the turn of the century that Muslims will begin to overtake Christians, and then only by 1% worldwide.
In Europe, however, the decline of Christianity and the rise of Islam will continue.

By 2050, the Pew report predicted that 30 per cent (2.8 billion) of the population will identify themselves as Muslim compared to 31 per cent (2.9 billion) identifying themselves as Christian. In Europe, it is suggested that by 2050, 10 per cent of the continent will be Muslim and in the US, it will become the second-largest faith.

These projections are based only on demographic trends. We should remember that most predictions like this end up being wildly inaccurate because they cannot predict a whole range of other variables. Here are some unpredictable variables which could affect these predictions:

* A revival of Christianity in the West. In the late eighteenth century atheism, rationalism and Freemasonry seemed to have taken over Europe. By the mid to late nineteenth century religious revival had swept through Europe and Christianity was surging forward. This revival was a result of fervent preaching, supernatural occurrences like Lourdes, new saints and evangelization.* war or natural disaster – war, natural disaster or plagues can affect the religious demographic–both wiping out whole populations and turning people back to religion

* Mass conversions – history has shown (Mexico in the sixteenth century) that there can be an outpouring of the Holy Spirit and whole populations will suddenly convert to Christianity. While missionary efforts to Islamic countries are largely unsuccessful a supernatural conversion of Muslims to Christianity could change the landscape.

* Immigration and population controls. Western governments might start restricting Islamic immigration and deport Muslims. This would alter the religious scene and make the predictions go awry

* Unexpected change in human reproduction. Many of the predictions are based on the assumption that artificial birth technologies will continue to advance throughout the world. Things could go either way: Muslims who are reproducing more than Christians might start to use artificial contraception and abortion or Christians might stop using them. Social trends might be reversed by economic conditions and people may start wanting large families or the unimaginable might happen: birth control pills might stop working and everyone will start having more babies.

The bottom line is that religion is here to stay, and the predictions are that all religious groups will experience growth through the end of the century.
Atheists and agnostics are the only ones (along with Buddhists) who will see their numbers decline.
Tweet
Donate
Share
Since you are here…

Most viewed articles
Strong Orthodox Presence at the 2022 March for Life158
As the End Draws Near – Silence122
Do We Act Differently Than Others?108
Patriarch Porfirije Thanks the Russian Church for Participation in Restoring Serbian Churches103
Metropolitan Onuphry: “The Key to the Doors of Paradise is Repentance”57
March for Life participants optimistic for a post-Roe America: ‘This is just the beginning’52
A Stone Thrown at God and Your Neighbor29
Sunday of the Samaritan Woman2
The Apostles’ Fast and Theology1
How We Worship: the Struggle of the American Experience1
Most popular authors
Pravmir.com team318
Archpriest Stephen Freeman122
Priest Luke A. Veronis107
Ryan Foley52
Protopresbyter Themistoklis Mourtzanos29
Maria Trushanina1