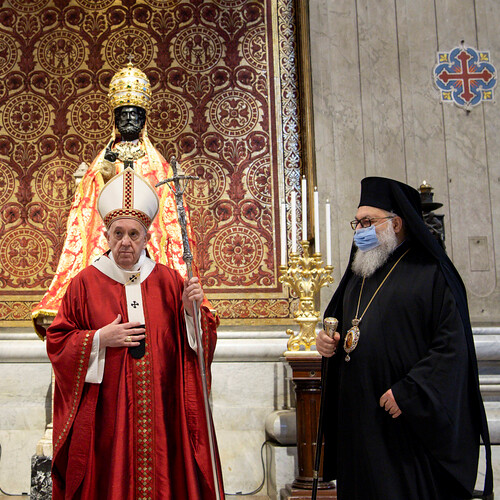 His Beatitude Patriarch John X is visiting Pope Francis, the leader of the Roman Catholic Church, in the Vatican City. In addition to a private meeting, Patriarch John witnessed a mass in celebration of Ss. Peter and Paul on their feast day, June 29. The Vatican also announced a day of prayer on July 1 for Lebanon.

This is the second meeting in the Vatican between these two church leaders, the first meeting having occurred in September of 2013.

An official statement from the Patriarchate of Antioch

His Beatitude John X, the Greek Orthodox Patriarch of Antioch and All the East, met Pope Francis at the Apostolic Palace in the Vatican City.

The private meeting between His Holiness and His Beatitude touched upon the day of prayer for Lebanon to be held on July 1 in the Vatican, at the invitation of His Holiness to all the heads of Christian communities in Lebanon. The meeting also touched on the Christian situation in the Middle East in all its aspects.

His Beatitude expressed to His Holiness the Antiochian point of view: tolerance, refusing introversion and exclusion, and building bridges of inclusion to all components.

His Beatitude commended the role entrusted to the Holy See to save Lebanon by exerting pressure for establishing a Lebanese government and by supporting the combined proposals and consensus to determine the fate of one united Lebanon in coexistence and citizenship.

His Beatitude also presented the situation in Syria, noting the necessity to lifting sanctions on Syria and Lebanon, as they affect the citizen’s livelihood.

The meeting also touched on the issue of the kidnapped bishops of Aleppo, Paul Yazigi and Yohanna Ibrahim, as it is necessary to reach the desired end of this case, which is still disregarded by the international community.

For his part, His Holiness praised the pioneer role of the Church of Antioch in the region and affirmed the continuous endeavor of the Holy See towards all that is for the good of Lebanon and the region.

The Antiochian delegation that accompanied His Beatitude was formed of Metropolitan Silouan Moussa (of Mount Lebanon) and Archimandrite Parthenios Al-Latti.