Source: Sputnik News
Pope Francis has expressed willingness to maintain friendship with Georgia, calling it a "sacred" nation during his meeting with the head of Georgia’s Orthodox Church in Tbilisi, the country’s capital.
Natalya Mihailova | 01 October 2016
TBILISI (Sputnik) – In February, head of the Russian Orthodox Church, Patriarch Kirill of Moscow and All Russia, held historic talks with Pope Francis in Cuba’s capital, Havana, where they issued a joint declaration urging global action to stop the persecution of Christians. 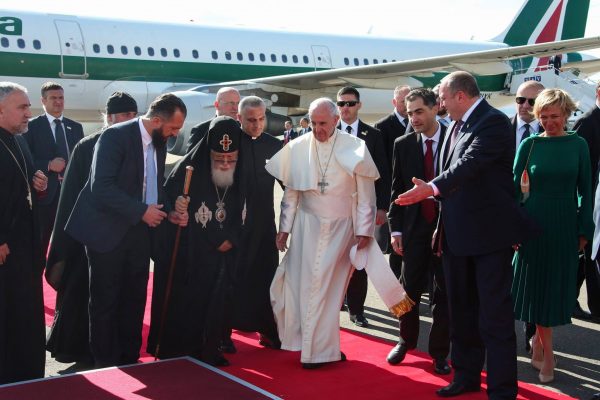 “Please accompany me with your prayers so we can sow peace, unity and reconciliation together,” Pope Francis wrote on Twitter on the day of his departure for Georgia.

After meeting with the head of the Georgian Orthodox Church, Catholicos-Patriarch of All Georgia Ilia II, on Friday night, Pope Francis said he was glad to have had the opportunity to visit Georgia. Patriarch Ilia welcomed Francis as “my dear brother.”

Apart from Patriarch Ilia II, Pope Francis also met with Georgian President Giorgi Margvelashvili and Prime Minister Giorgi Kvirikashvili on Friday. Saturday is the second and last day of Pope Francis’s visit to Georgia. On Sunday, the head of the Roman Catholic Church will travel from Tbilisi to Azerbaijan’s capital, Baku.