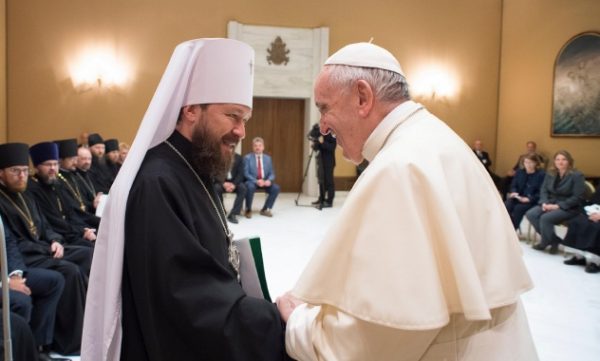 On May 30, 2018, Pope Francis of Rome met at the Paul VI Audience Hall in the Vatican with delegations of the Russian Orthodox Church and the Italian Bishops’ Conference, who gathered together for the Russian-Italian dialogue to discuss church pilgrimage as parts of civil societies.

Participating in the meeting from the Russian Orthodox Church were:

The participants in the audience from the Roman Catholic Church included: 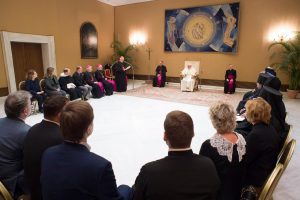 Opening the meeting, Cardinal Bassetti presented to the Pope the theme of the dialogue between the two Churches concerning pilgrimage to Christian holy places and introduced to the Pope the two delegation members in episcopal rank.

Addressing Pope Francis with words of greeting on behalf the Moscow Patriarchate delegation, Metropolitan Hilarion underscored the importance of dialogue between the Russian Orthodox Church and the Roman Catholic Church in Italy for strengthening mutual understanding and lasting peace between nations, saying, ‘In the centre of our dialogue is the great heritage of Christian culture created by the Russian and Italian nations under the pastoral guidance of the Church. At a time of dramatic divisions in the world, it is difficult to overestimate the humanitarian and peacemaking role of Churches. The sphere of culture with its universal language has a tremendous potential for the common witness of Churches to the common human values of peace, goodness, love, mercy and forgiveness, which find their ultimate expression in the gospel’s message’. 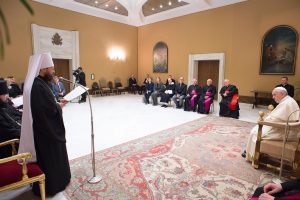 As Metropolitan Hilarion said further, the Common Declaration signed by Pope Francis and Patriarch Kirill in Havana stressed the common spiritual tradition of the Churches of East and West. Among the most important elements of this tradition is veneration of saints. It was at the Havana meeting that an agreement was reached that the relics of St. Nicholas the Wonderworker lying in rest in Bari should be brought to Russia.

The DECR chairman informed the pontiff that one of the man shrines of the Russian Church – the icon ‘Crucifixion’ painted by Dionysius, a great disciple of St. Andrew Rublev, will arrive this autumn to Rome. ‘For the first time this word-known Russian icon will leave Russia to appear before the eyes of thousands of pilgrims who come to Rome. Together with it, twenty more icons from the collection of the State Tretyakov Gallery will be displayed at the St. Peter Cathedral’, Metropolitan Hilarion noted.

In conclusion of his remarks, the head of the Russian Orthodox Church delegation said, ‘Pilgrimages to common Christian shrines kept in the Roman Catholic Church or the Orthodox Church introduce pilgrims to the traditions, history and art heritage of the Church and people of a particular country. This, in its turn, cannot but promotes mutual understanding, Orthodox-Catholic dialogue and strengthens international and interreligious peace’. 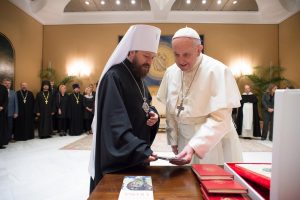 In his response, Pope Francis cordially welcomed the two delegations pointing to the importance of communication and beneficial dialogue between the Orthodox and the Catholics. Addressing the delegation of the Russian Orthodox Church and personally Metropolitan Hilarion the Pope said, ‘In your presence and especially before you, dear brother, I would like to stress once again that the Catholic Church will never allow, on her part, of an approach that provokes divisions. We will never allow of it. I do not want it. In Russia, there is only one patriarchate – yours. And we will not have another’. According to the Pope, uniatism as a method is completely unacceptable in the relations between the Orthodox and the Catholics at the present stage; it is only a fraternal dialogue that is the only possible way to a greater unity. His Holiness spoke with warmth about the meeting with His Holiness Patriarch Kirill of Moscow and All Russia in 2016 in Havana, which was of great importance for the development of relations between the two Churches. The pontiff pointed out that ‘the Catholic Churches should not interfere in the internal affairs of the Russian Orthodox Church, including also for political reasons. This is my position and the position of the Holy See today. Those who do otherwise do not obey the Holy See’.

In conclusion of the audience, the members of the both delegations were introduced to the Pope, after church the sides exchanged tokens of the meeting.