Source: Orthodox England events' blog
Genuine conversion is all about not being different in externals, not attention seeking, but about converting the inside. Go to any ordinary parish and you will see people dressed anonymously – they could be anyone, but maybe one of them is a saint. Genuine Orthodox Christians do not stand out, except by their example of living a good life.
Archpriest Andrew Phillips | 12 October 2015 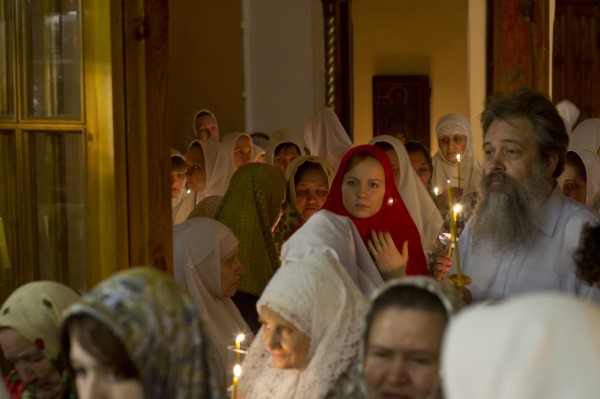 It is strange that a foreign word, the Slavonic (not Russian) word ‘prelest’, should sometimes be used in English. It is only a translation of the Greek word ‘plani’ and long ago in the fifth century it was translated from Greek ascetic works into Latin by the Gaulish St John Cassian as ‘illusio’. So in English it could be translated simply as (spiritual) illusion, but perhaps the English word ‘self-delusion’ is even more exact. ‘Prelest’ simply means a state of mind in which we imagine that we are something that we are not, in other words, we are deluded. There are two states that greatly contribute to the development of self-delusion.

The first is an emotional state, an excess of imagination and strong feelings. Feelings of self-exaltation, sentimentality, vanity, narcissism and superiority, living in the imagination, which are all simply forms of pride, create fertile soil for self-delusion. Ultimately, these feelings can even develop into psychic phenomena like self-hypnosis, levitation and the production of physical marks like ‘stigmata’. On a simpler level, such states produce pomposity and self-love, the person who is absurdly in love with himself and his gifts, not seeing that anything good is God-given. Such people are easily mocked, as they are ridiculous. Clearly, such feelings are based on vulgar pride. The antidote to them is inner sobriety – a quality most characteristic of the Fathers and the Saints, for it is based on modesty and so humility.

The second state is isolation. People who isolate themselves from others and condemn them, because they think that are better than them, soon fall into self-delusion. They cultivate strange and unique practices because they do not belong to the catholicity of the Church, from which they have cut themselves off. They are too good for the rest of the Church. They do not see that such practices are provincial, literally, ‘parochial’. For example, we can think of one tiny community where all four female members have to wear long, down to the floor, dresses and a strange hat and another where all the men have to be bearded. There is one which is known as ‘the pony tail club’, since that is how the men have to wear their hair like their guru. A fourth practices a ‘secret language’, an esoteric code of garbled foreign words which of course the non-initiated cannot understand. Clearly, the smaller and the more self-isolated the community, the stranger the customs. The antidote to all this is to mix with others, to visit other parishes and monasteries, to see what is normal.

Here we can see the connection between this state of self-delusion and conversion (regardless of the nationality of the neophyte). The essential disease of conversion is to identify the Faith with externals. ‘Beard competition Orthodoxy’ is a typical example of this, but so is wearing prayer knots around the wrist or wearing a large cross outside one’s clothes or women wearing an exaggerated head covering. Genuine conversion is all about not being different in externals, not attention seeking, but about converting the inside. Go to any ordinary parish and you will see people dressed anonymously – they could be anyone, but maybe one of them is a saint. Genuine Orthodox Christians do not stand out, except by their example of living a good life.

There is nothing so disheartening as one who has been a member of the Church for 40 or 50 years, but still calls himself a ‘convert’. It is over – move on. St Paul never refers to himself as a convert. Nor does anyone who has got over the first few months of conversion to the Church and its novelties. All must pray for those who are in the early stages of conversion, that they may get through these stages as swiftly as possible. As Psalm 50 says: ‘The sacrifices of God are a broken spirit: a broken and a contrite heart, O God, Thou wilt not despise’ (Psalm 50). ‘The burnt offerings’ were never necessary, so do not make them.