It seems that most of us are double-minded and weak-willed, but the Prince-Baptizer was not. Vladimir arose from the baptismal font another person. His lust faded, his cruelty was replaced by the desire to feed the hungry, and his proud and cunning thoughts were supplanted in his soul by the simplicity of the Gospel. In this we ought to imitate the Prince.
Archpriest Andrei Tkachev | 28 July 2015 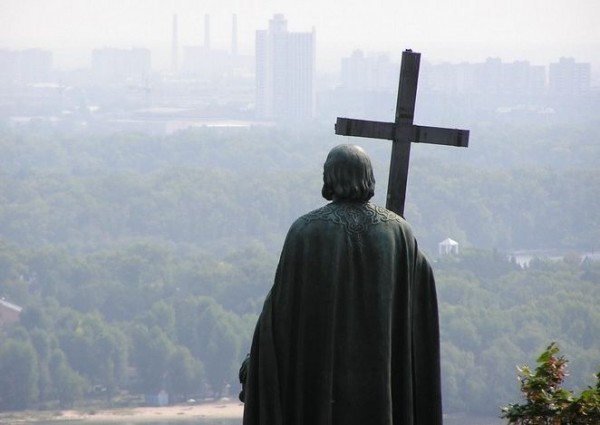 Vladimir baptized Russia, but first he was baptized himself. Here is Constantine the Great, who presided over the First Ecumenical Council and was called an “external bishop,” who patronized the Church in the Empire – but he was not baptized until he was approaching death. The moral sense of Vladimir is dearer, because before changing the lives of others, he himself changed.

There is no need to doubt his holiness, as is the custom of some to do. And let us not be confused by the sinful darkness in which he passed his life before baptism. Rare is the kind of holiness when someone is pure from childhood to old age. More often, people’s lives are divided in two: “before” and “after.”

Christ’s grace, as apprehended by man, is a dissecting blade. And here it is important to understand that the truly holy person is not one who was flawless from childhood, but rather one who after receiving grace does not allow himself to return to that which was “before.” Vladimir did not go back. Vladimir is holy.

He is very important for us, this Prince, who before baptism bore in himself all the ailments of the popular soul. In lust he was insatiable, to intoxication he was not indifferent, in wrath he was terrible, in mercenary deeds he was cunning. This is the portrait of a true pagan, the son of passions and the servant of demons. Such a person is not ashamed of sin, but only of weakness and failure; he hates his enemies with all his soul, and does not give favor to any weak views. He cherishes his passions and, looked at from the outside, the mind cannot imagine what would have to happen for this questionable “child of nature” to change his way of life for the better.

Such, most likely, were the Teutons whom the Romans systematically and brutally conquered and forcibly ameliorated. Such were our neighbors to the north: the Normans, who for centuries wrought terror on all their neighbors by their raids. The morals of these historical persons were humbled and tamed by missionaries and preachers.

But our Prince humbled himself and then showed the path to another life to his people. In our moral rebirth there was no participation by either the agents of cultural transmission from occupying armies, nor detachments of foreign missionaries.

The Prince is important to us in that he himself changed. I ask that you draw your attention to this thought. Like a river, it divides into two branches.

First, many rulers suffer from the false idea that they need to rule well, while their own morality is something unimportant.

Either they dissemble, or they are unaware that an unpurified person cannot purify others. Therefore one needs to look upon Vladimir as a teacher, who humbled himself and came to know God before he began to lead the simple people to the Dnieper for baptism.

The second point concerns all of us in general. It consists of the fact that Vladimir changed! We so rarely and so poorly allow ourselves changes for the better. We all put off our correction, or we put off our half-hearted attempts until the New Year, or until Monday.

And we can certainly not accuse God of our futility. He grants grace, does not refuse to come to our assistance, and says to all the faithful: He shall cry unto Me, and I will hearken unto him (Psalm 90:15).

It seems that most of us are double-minded and weak-willed, but the Prince-Baptizer was not. Vladimir arose from the baptismal font another person. His lust faded, his cruelty was replaced by the desire to feed the hungry, and his proud and cunning thoughts were supplanted in his soul by the simplicity of the Gospel. In this we ought to imitate the Prince.

He who is capable of understanding the invaluable importance of a change for the better, accomplished by man once and for all, will never doubt the holiness of a changed man. And it is unimportant what sins were earlier hidden in this man.

Vladimir, as Tradition states, watched from the hills upon the Dnieper, where the old and the young of his people were baptized in the coastal waters. Waves of delight and great thoughts filled his astounded mind while the waves of the Dnieper cleaned people in the Name of the Father, and of the Son, and of the Holy Spirit.

There, raising his hands like Solomon at the dedication of the Temple, he prayed for the renewal of his people. Let it be known to us that prayer that is fiery and from the heart does not die. Directed to the Living God, it itself becomes living and immortal, and continues to sound and act throughout the ages. Therefore, on the Day of the Baptism of Russia, let us labor to stand noetically at the foot of that hill on which the Equal-to-the-Apostles Prince prayed with raised hands. He prays for us, too, and God hearkens to his prayer.