Source: DECR
Natalya Mihailova | 30 July 2015
On July 27, 2015, His Holiness Patriarch Kirill of Moscow and All Russia met with the delegations of Local Orthodox Churches, who came to Moscow for the millennium of the demise of the Holy Prince Vladimir Equal-to-the-Apostles. 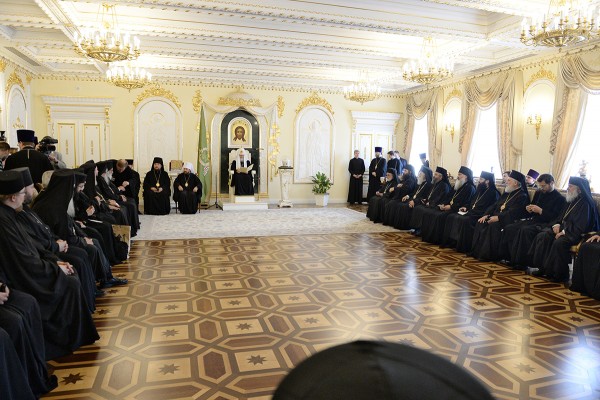 There were delegations of the Orthodox Churches of Constantinople, Alexandria, Antioch, Jerusalem, Georgia, Serbia, Romania, Bulgaria, Cyprus, Greece, Albania, Poland, the Czech Lands and Slovakia, and Orthodox Church in America.

Present at the meeting were also Metropolitan Hilarion of Volokolamsk, head of the Moscow Patriarchate department for external church relations (DECR), Bishop Sergiy of Solnechnogorsk, head of the Moscow Patriarchate administrative secretariat, Archpriest Nikolay Balashov, DECR vice-chairman, and other ROC clergy in charge of inter-Orthodox relations.

Addressing the gathering, Patriarch Kirill said in particular, ‘One thousand years have elapsed since the demise of the Baptizer of Rus’, but his memory has not died away to become an exclusive property of academic science, but continues living in the hearts of millions of the faithful in all the nations who derive their sources from the Dniester baptismal font… Alien to one another and capable of indifference, strife or political union before, the nations, by their communion with Christ, became one Body of His Church, uniting in the Spirit of God with all who are near and who are far and opening up anew in brotherly love’.

His Holiness said that the commemoration days of such Baptizers of nations as Prince Vladimir, King Boris of Bulgaria, Prince Rostislav of Moravia, St, Nina the Enlightener of Georgia, and others are not only national days but also the celebration of the Plenitude of the Church. ‘We see today that the commemoration celebrations devoted to the Baptizer of Rus’ have brought together representatives of Churches from all over the world who like loving brothers celebrate our unity’.

Patriarch Kirill also spoke about unity as a characteristic of the Church of Christ and a value for any Orthodox Christian. ‘It is the greatest gift of God that, despite many political and other conflicts, we have preserved our unity… We are united in that together we repulse those who wish to sow discord and divisions in the Church…

‘Together we seek to draw the public attention to the suffering of our brothers in the Middle East and North Africa, in Kosovo and Metohija, and now in south-east Ukraine, where the blood of Orthodox Christians is spilt, churches of God are defiled and destroyed, scores of refugees with no roof are exposed to continued danger coming from radical forces motivated by the ideology of ethnic and religious intolerance’.

Speaking about the situation in Ukraine, Patriarch Kirill said, ‘The Lord Jesus Christ says, He who does not gather with Me scatters (Lk. 11:23). Therefore we are not surprised to see that those who have renounced the unity of the Church by going into schism are now destroying the unity of their people and country through aggressive propaganda of war, encouraging violence and slurring the canonical Church in Ukraine accusing her of a lack of patriotism only because she calls to peace and people’s accord’.

His Holiness also spoke about the unity of the Orthodox Church which should be manifested at the Great Council of the Orthodox Church under preparation. ‘We expect from the forthcoming Council the adoption of documents addressed to our contemporaries – all those for whom the voice of the Orthodox Church has authority and power… We expect the documents to deal with pressing problems of the day, not problem which have become irrelevant things of the past’. The preparations of the Pan-Orthodox Council, he said, should be carried out in the spirit of unanimity ‘so that the Council could have an opportunity to address the whole world with a bright and strong prophetic message. It is such a message that the world expect from us today’.

In conclusion of his remarks, His Holiness thanked all the bishops, priests and lay people for having undertaken to come to Moscow for the St. Vladimir celebrations.

Metropolitan Apostolos of Mileta greeted Patriarch Kirill on behalf of His Holiness Patriarch Bartholomew of Constantinople and all the representatives of Local Orthodox Churches. He spoke in detail about the historical journey made by the Kiev principality and its rulers to the adoption of Christianity and the significance of the personality of St. Vladimir, who ‘not only asserted Christian faith in the Russian land but also became a reformer who brought in culture, playing the same role as Constantine the Great did for Byzantium’.

In conclusion of his speech, Metropolitan Apostolos said, ‘The radiant celebration held to commemorate the great Prince Vladimir is a remarkable occasion for all of us to remember the inviolable fraternal bonds tying the two Churches and to come in touch again with our common and precious Byzantine heritage and to see how we should work for the unity so dear to us so that we may show all the beautiful and salvific world of the One Holy, Catholic and Apostolic Church and approach the forthcoming Holy and Great Council in the sincerity of our hearts’.

In his response, Patriarch Kirill said, ‘It is important for us today to hear the voice of the Church of Constantinople, from which our people received baptism through the great Prince Vladimir. Thank you for remembering Patriarch Photius who sent Ss Cyril and Methodius to northern lands in which the Ross lived to preach the truth of Christ. We are aware how important was his presence in Crimea and northern Black See cost for sowing the seeds of Christian faith’.

Stressing the world historical significance of the Baptism of Rus’, Patriarch Kirill said that ‘it is important in the first place for all the Slavic nations who lived and live in the vast lands of historical Rus’.

His Holiness presented the guests with jubilee medals “In Memory of the Millennium of the Demise of Prince Vladimir Equal-to-the-Apostles’.