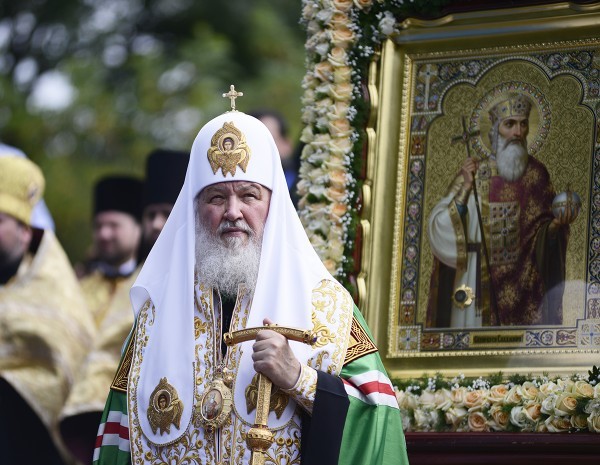 This year the whole Church of Russia and together with her the entire Orthodox world are marking the millennium of the demise of the Holy Prince Vladimir Equal-to-the-Apostles.

What has this man brought us? Why after many centuries we commemorate him so solemnly? The essence of the prince’s feat is remarkably expressed by St. Hilarion in his famous Homily on the Law and Grace:

‘All the countries and cities and peoples honour and glorify each their own teacher who has taught them Orthodox faith. Let us too, as much as we can, praise the one who did a great and wonderful thing, our teacher and leader Vladimir, the Great Prince of our land’.

His wise choice changed the whole course of our history, for he brought us the good news of Christ the Saviour of the world – the unfading Sun of the Truth that illuminated the human existence with His divine light. Thanks to St. Vladimir, our people found themselves under the protection of the Intercessor swift to hearken – the Most Holy Virgin and Mother of God who spreads her honourable omophorion over our land. Thanks to this holy ruler, the Church of Russia was founded, which brings to people for over one thousand years now the word of life, love and peace and in which we, just as our forefathers, find the Heavenly Kingdom.

By embracing the faith from the Eastern Roman Empire, Byzantium, Rus’ came to fully share both the Divine Revelation and the greatest cultural tradition of the time, creatively taking in and developing it. Like the Equal-to-the-Apostles Emperor Constantine, Prince Vladimir was not afraid of defying the views of his armed force and boyars – the ruling class of Old Rus’, who associated the heathen worship with power, wealth and fertility. He was not afraid either of the wrath of the crowd instigated by heathen priests to make bloody sacrifices. Like Moses who heard the call of God: Bring My people out of Egypt (Ex. 3:10), Prince Vladimir brought Rus’ out of the pagan captivity and put her on the bright path of confessing Christ as God and Saviour. This man equal to the Apostles became one of those who symbolize the Orthodox ideal of righteous power guided by true values, directing the individual and society to God and to life according to His commandments. As we know, the Baptizer of Rus’ was concerned not only for the devotion of the newly-enlightened people but also for their education and help to the needy.

St. Hilarion, praising the Prince of Kiev, says, ‘It was not one man or ten men or a city, but this whole land that he turned away from the falsehood of idolatry’. These words were uttered as far back as the 11th century when the wonder of the Baptism of Rus’ happened not long ago. It was followed by ten centuries of our Christian history. During this time the Lord revealed a multitude of saints in our people and our culture and civilization was formed. And all this is what we live by today. Our very worldview is founded on the fateful decision made by Prince Vladimir to turn to true God and make the people follow him.

The Dniester baptismal font initiated a new, Holy, Rus’, and our spiritual unity. For the centuries that elapsed since that time, attempts were made to eliminate Orthodoxy, to sow discord and civic tribulation among our peoples, to lure people by false ideas and promises of early temporal happiness and material prosperity. However, by the Lord’s grace, Holy Rus’ lives in our hearts to this day, for our peoples to this day have one faith and one Church, common shrines, countless models of Christian feat and a common history.

Today again we are experiencing a difficult time when senseless people seek to divide us, to deprive us of peace and accord by sowing enmity and hatred among brothers. These people, on the basis of momentary moods and egoistic aspirations, make dangerous decisions having long-term and sometimes even indelible consequences. But wise people understand that their life and good works can become a part of God’s design for the salvation of the world. That is why they always keep eternity in mind and look mentally to history, learning lessons from it and finding answers in it to the most important problems of today.

We all need to look for these answers, overcoming the negative information noise produced by the mass media. And we can find them also in the examples of great personalities who made a beneficial influence on the development of our people and who are canonized by the Church. Prince Vladimir Equal-to-the-Apostles is one of them as he laid the saving faith of Christ in the foundation of the life of the peoples in historical Rus’.

May the Merciful Lord the Lover of Mankind, through the intercession of St. Vladimir, help us to stand steadfast in Orthodoxy, guarding ourselves, just as His apostles did,  by purity, by knowledge, by longsuffering, by kindness, by the Holy Spirit, by sincere love (2 Cor. 6:6). Amen.

Most viewed articles
How to Get Rid of Spiritual Infantilism?107
How to Respond to Opposition to the Gospel101
A Piece of Rock Falls Down on the Skete of St. Anna on Mt. Athos85
His Beatitude Metropolitan Tikhon Issues Statement on Tragic School Shooting in Texas63
Three Words53
Romanian priests in Madrid draw conclusions on the benefit of praying together with family members45
test1
Most popular authors
Priest Andrei Chizhenko107
Archpriest Basil Ross Aden101
Pravmir.com team85
Metropolitan Tikhon of All America and Canada63
Archpriest Geoffrey Korz53
Aurelian Iftimiu45
Maria Trushanina1