Putin venerates St Nicholas’s relics in Cathedral of the Savior

Source: TASS Russian News Agency
Natalya Mihailova | 24 May 2017
MOSCOW, May 24. /TASS/. President Vladimir Putin came to Moscow's downtown Cathedral of the Savior on Wednesday to venerate the relics of St Nicholas the Wonderworker that arrived in Moscow from Bari, Italy, on Sunday. 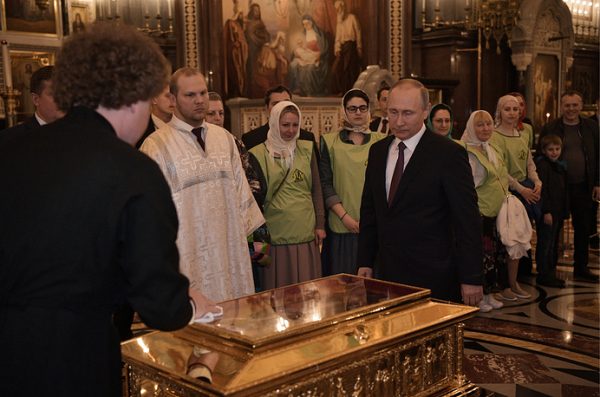 Prior to visiting the cathedral Putin came to the official residence of the Patriarch of Moscow and all Russia Kirill I. He congratulated the Patriarch on the occasion of patron saint’s day and also had a meeting with the visiting head of the Coptic Orthodox Church, Pope Tawadros II.

“This event (the delivery of a fragment of St Nicholas’s relics from Bari to Russia TASS) became possible thanks to an agreement reached at a meeting between Patriarch Kirill I and Pope of Rome Francis I,” Putin said. “It’s a big event for Orthodox Christian believers.”

“We’re thankful to Pope Francis I and the Holy See for the decision they took following the Patriarch’s request,” he said, adding that Russia attached significance to the promotion of inter-Church relations.