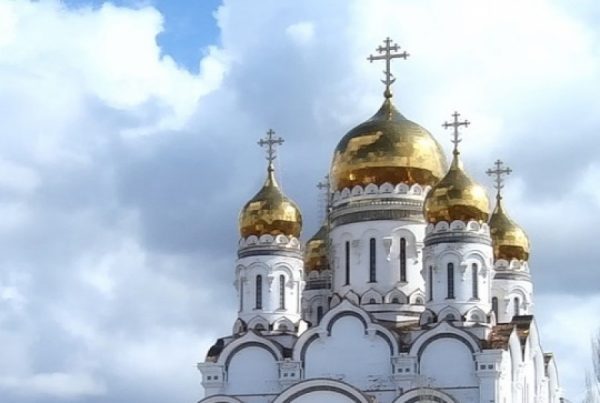 Opening the meeting, His Eminence Hilarion proposed prayerfully commemorating a series of hierarchs of the Russian Church Abroad who had reposed in the months of September and October of years past. His Eminence then congratulated Metropolitan Mark on the forthcoming 40th anniversary of his episcopal consecration, wishing him continued Divine aid in his archpastoral labors in Germany.

Archbishop Kyrill then reported on the situation in California, which is still suffering wildfires, and asked the holy prayers of the Hierarchs for his flock.

The agenda, previously distributed to the members of the Synod of Bishops, had been already approved in writing.

Archimandrite Roman (Krassovsky), Chief of the Russian Ecclesiastical Mission in Jerusalem, reported on the life of the holy monasteries, churches and Orthodox Bethany School, all part of the REM under ROCOR. He reported that the Israeli government had renewed quarantine measures. Life at the holy monasteries on the Mt of Olives, Russian Gethsemane and Fara continues with the customary divine services but without pilgrims. Bethany School is closed, but Fr Roman was able to send one of the mission’s clerics to its Orthodox Community of the Resurrection of Christ, who celebrates divine services there, providing pastoral ministry to its monastics and schoolgirls. The REM is preparing a virtual conference devoted to the hundredth anniversary of its ministry by the part of the Russian Church abroad, and such figures as Metropolitan Anastassy (Gribanovsky), who had labored a great deal there for the preservation of the Church’s legacy in the Holy Land. Next year, the REM will mark the centenary of the transfer of the holy relics of the Martyrs of Alapaevsk: Grand Duchess Elizabeth and Nun Barbara. The final decision on the timing of the celebrations will be made at a subsequent meeting of the Synod of Bishops.

Following Fr Roman’s report, Nicholas Ohotin, Communications Director, delivered a report on legal and property issues. The Synod then discussed other administrative and financial matters as well as requests by the archpastors for awards to clergymen and laypersons of their dioceses.

Deliberating on matters of monastic life, inter-Orthodox relations, the supplementation of clergy and the episcopate, the archpastor members of the Synod also discussed problems connected to the coronavirus and consequent difficulties and the oppression of religious rights in various countries where the Russian Church Abroad exists.

At the request of the members of the Synod of Bishops, Metropolitan Hilarion addressed the clergy and flock of the Russian Church Abroad in March of this year with the following message:

“The current global outbreak of coronavirus dominates the daily headlines, with reports every day of new cases. Nevertheless, the divine services in our churches will continue, and Communion of the clergy and laity will be performed in the usual manner. In everything else, I ask that you undertake reasonable precautionary measures, adhering to common sense and the recommendations of local authorities, in order to preserve the health of the people and arrest the virus’ spread. If you are experiencing symptoms reminiscent of a cold, or if you have spent time with those who are ill, please have consideration for your neighbors, refrain from attending church, and pray at home.

The most important thing in these days is to preserve calm and inner peace, trusting in God. May the Lord help us not only to believe in Him, but also to trust in Him and in His guidance, that we might not lose spirit, and may act with goodly wisdom.”

In his open letter sent to the Governor of California, Archbishop Kyrill objected to the prohibition of choral singing in his state, calling the measure discriminatory. The parishes and monasteries of the Western American Diocese observed all sanitary measures imposed by the local authorities:

“Even though they were deprived of the reverent Divine Services of Great Lent and the joyous celebration of the Triumph of the Holy Resurrection, our parishioners were sympathetic to our directives, attending our churches ‘virtually.’ However, we now observe a contradiction in that mass protests take place everywhere, at which absolutely all precautions are violated with impunity. Yet, liturgical singing performed during the Divine Services and while observing all of the rules, is forbidden,” reads the letter of His Eminence. “This is open discrimination, hypocrisy and the infringement of our religious rights, prompting us to recall the era of godless persecutions in the USSR.”

This summer, the President of the Synod of Bishops sent an archpastoral epistle to the clergy and flock of the Eastern American and Australian Dioceses under his aegis, in which he wrote:

“I call on the parish and monastery rectors who are opening their churches for public services to follow all hygienic norms and local guidelines, remembering that the first Christians, despite persecutions, were always law-abiding citizens of their countries. We bless the communing of the clergy and laity, as always, in the usual fashion, which we called for even during the period of strictest quarantine.”

During their fraternal discussions on this matter, the archpastors shared experiences of ministry and the ecclesial resolution of problems and difficulties during this crisis.