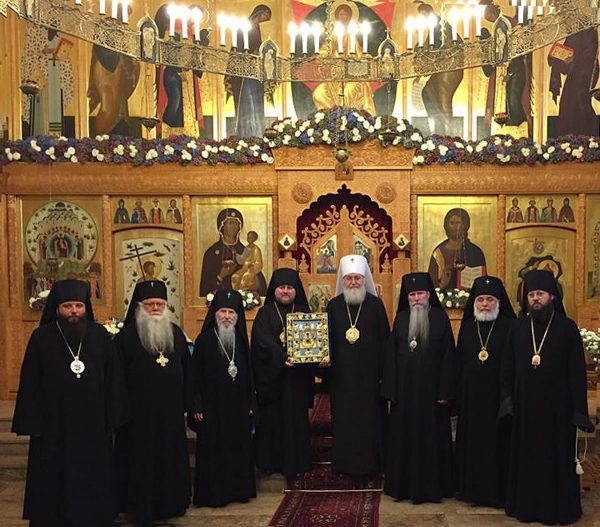 Opening the meeting, the President welcomed his brother archpastors, emphasizing the work done by Archbishop Mark and Bishop Irenei in uniting the parishioners and worshipers around the creation and adornment of the London cathedral, and wished all the participants of the Synod meeting Divine aid in their continuing work.

During Archbishop Mark’s report on the Russian Ecclesiastical Mission in Jerusalem of the Church Abroad, Archbishop Peter also told of his recent meeting with His Beatitude Patriarch Theophilos III of Jerusalem and All Palestine, who expressed his surprise at the encroachment of the canonical territory of the Ukrainian Orthodox Church by exarchs of the Patriarch of Constantinople. Bishop Nicholas requested and received blessing to organize a pilgrimage to the Holy Land of clergy and laity from the USA next year.

The Synod of Bishop heard reports by Protopriest Paul Elliot, Chancellor of the Parishes of Great Britian, and Protopriest Adrain Ecchevarria on the history and present status of Great Martyr Barbara Church in Vevey, Switzerland. Fr Paul reported on the work of the diocesan council, of the pastoral gatherings hosted by Bishop Irenei and his pilgrimages to the holy sites of the diocese, noting the need for a second priest for the cathedral, where some three hundred worshipers gather on Sundays and holidays. The Synod of Bishops expressed its satisfaction with the work of the Chancery of Great Britain, invoking God’s blessing on Fr Paul and his assitants.

Fr Adrian began his report with a history of the Church of St Barbara, which was consecrated on the feast of the Protection of the Most-Holy Mother of God in 1878. Over the course of many years, Protopriest Igor Trojanoff (+1976) and Bishop Ambroise (Cantacuzene) served there. The parish consists of 160 families of various backgrounds. Of them, 80% are Swiss citizens. This year they will celebrate the 140th anniversary of the establishment of the church. Renovations were conducted in preparation for the event. Protopriest Adrian concluded his report by noting that the life of the parish is not one of a nostalgia for a bygone era, but a bright example of living Orthodox Christianity. The Synod of Bishops, hearing Fr Adrian’s report with great interest, granted him, his clergymen and parishioners a decree of blessing to mark their anniversary, wishing Fr Adrian many Divine mercies in his service.

After discussing events connected with the sending of his exarchs to the canonical territory of the Ukrainian Orthodox Church by the Patriarch of Constantinople, the Synod of Bishops decreed: “Following the decision of the Hierarchy of the Russian Orthodox Church, to cease concelebration on the hierarchical level with the Orthodox Church of Constantinople, and suspend the participation of the Russian Church Abroad in the work of all episcopal assemblies, for which to issue a corresponding ukase.”

The hierarchs then discussed the possibility of filling the ranks of the episcopacy, discussed administrative matters and heard a series of intercessions by its ruling bishops for church awards for their clergymen and laity.