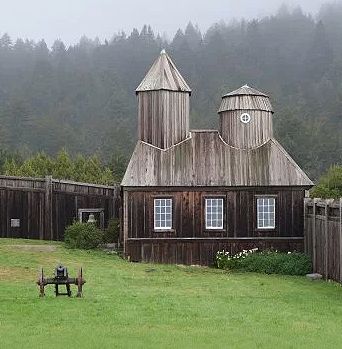 The trustees of the Russian Geographical Society (RGO) are planning to restore the Orthodox Holy Trinity Chapel on the territory of the Fort Ross national historical park in Jenner, California, Nikolai Tokarev, the head of oil company Transneft stated at a meeting of the RGO Board of Trustees on April 24, reports TASS.

Mr. Tokarev said that Russian and American politicians, businessmen, and public figures meet annually at Fort Ross. “Today we can definitely say that the Fort Ross dialogue has turned into a positive point of crystallization in the relations between the US and Russia, which is very important today,” he explained, adding that when they received the proposal to support the reconstruction of the historic church, they didn’t have to spend much time thinking about it.

According to him, the upcoming work will contribute “not only to the reconstruction of the historical appearance of Fort Ross, but will also be the realization of the mission of dialogue, the center of gravity for all who care about Russian-American relations.

Another RGO Trustee, Frederick Doug Arfst Paulsen, also noted that “the Russian development of North America is an important part of history that is often forgotten.” Fort Ross is the only surviving Russian wooden stronghold in America, he noted, “but the United States does not allocate sufficient funds for its maintenance, and the structure needs restoration.”

He also highlighted the joint Russian-American work on the Fort as especially important in today’s political climate.

Fort Ross is a former Russian settlement and stronghold on the California coast, about 50 miles north of San Francisco. It was founded in 1812 by a Russian-American company to provide food for Russian possessions in Alaska and to expand the resource base of Russia in America. The Holy Trinity chapel was used by Russians and Aleuts who were members of the colony. The fort was sold to American landowners in 1842.

Several American saints—St Innocent of Alaska, St Sebastian Dabovich, and St Tikhon of Moscow—had visited and stayed at Fort Ross. Today, the fort is a place of pilgrimage several times throughout the year, on Memorial Day, the Fourth of July, and St Vladimir’s Day.