Source: TASS: Russian News Agency
On December 3 through 7, Patriarch Kirill is expected to visit Paris and Zurich
Natalya Mihailova | 04 December 2016
PARIS, December 3. /TASS/. Patriarch Kirill of Moscow and All Russia arrived in Paris on his first pastoral visit as the Russian Orthodox Church’s head to consecrate the new cathedral of the Russian Orthodox diocese of Chersonesus in France’s capital, to pray with Russian and French Orthodox believers and hold talks with state officials. 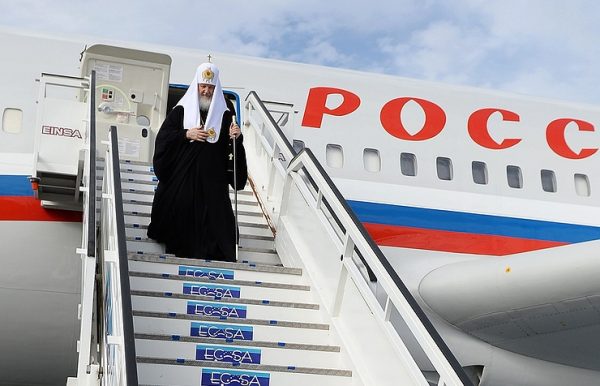 Photo: Press-service of the Patriarchate of the ROC / TASS archive

“I am delighted to arrive in France to pray with my congregation,” Patriarch Kirill said at Le Bourget Airport. He was welcomed by Russia’s Ambassador to France Alexander Orlov, Permanent Representative to UNESCO Alexander Kuznetsov and clergymen of the diocese of Chersonesus.

Consecration of the Holy Trinity Cathedral

“The coming consecration of the Holy Trinity Cathedral of the diocese of Chersonesus will become a milestone both in the Orthodox presence in France and in humanitarian relations between the Russians and French,” said Priest Alexander Volkov, the patriarch’s press secretary.

On Sunday morning, the Russian Orthodox Church’s head is due to consecrate the new Holy Trinity Cathedral, which is an architectural dominance at the Russian Orthodox Spiritual and Cultural Center opened on October 19. The center comprises an exhibition hall, a Russian-French school and a building for the diocese authorities with a concert hall and living premises.

Volkov said that the consecration of the Holy Trinity Cathedral and the first divine liturgy officiated by the Russian patriarch in it “is a landmark event both for the diocese of Chersonesus and for Russian Orthodox Church’s all foreign parishes,” which laity had been increasing recently.

The Russian Orthodox diocese of Chersonesus was named after the city of Korsun. That was the name Ancient Rus gave to Chersonesos Taurica in Crimea, where Saint Prince Vladimir the Great was baptized. Afterwards, he converted Kievan Rus to Christianity.

Nowadays, the diocese of Chersonesus consists of Russian Orthodox churches and monasteries in France, Spain, Portugal and Switzerland.

On December 3 through 7, Patriarch Kirill is expected to visit Paris and Zurich (Switzerland).