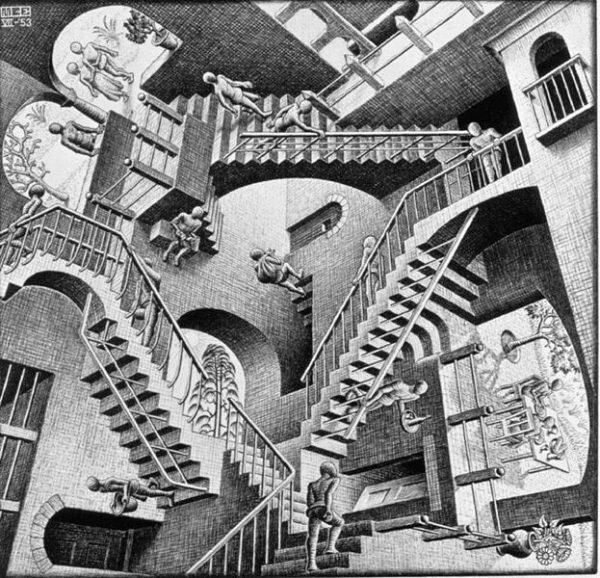 The Secular Man has been the great threat to the Christian faith over the past two or more centuries. Disguised as the person who is only doing the “normal thing,” he lives in a godless world, where others can be tempted to live as though there were no God. Earlier I quoted Berdyaev, “If God does not exist, then man does not exist.” I would add to that that the God Who Exists must be everywhere present and filling all things, or He is no God and a false god. Let us renounce the “soft atheism” of the secular man and live always and everywhere for God.

Many Orthodox writers have spoken about the nature of the secular world, the defining form of modernity. I take here an opportunity to make a small comparison between the secular man and the Christian.

The secular man may believe that there is a God, but he also believes that the situation and outcome of the world are dependent upon the actions of human beings.

The Christian man believes that there is a God, and that all things are in His hands.

The secular man believes in Progress. Life changes, and with good human direction, it changes for the better. Every new discovery stands on the shoulders of every previous discovery. In this way, life improves and always improves for the better.

The Christian man believes that whatever man does may change his circumstances, but does not change man. A modern man is in no way superior to those who came before him. Goodness is not a result of progress.

The secular man believes in the power of human beings. Reason, applied reasonably to any situation, will yield a better outcome.

The Christian man believes in God, but he doubts the goodness of man. Human solutions are always questionable and capable of failure.

The secular man believes, ultimately, in the smooth path of progress. Even though there may be set-backs along the way, he believes that pursuing the path of progress will ultimately yield a better world – even a near perfect world.

Because the Christian man believes in God, he trusts that the outcome of history belongs to God and not to man. Thus, even the good things done by man are judged by a good God whose goal for us is always beyond anything we could ask or think.

The secular man, despite various failures, always believes that the next good is only another plan away. Compromise, negotiation, and a willingness to change will finally solve all problems.

The Christian understands the sinfulness of humanity. He knows that without God things will always fail and dissipate. Only through trust and obedience to God can the human situation improve – and such improvement always comes as a miracle from God.

The secular man does not believe in his own fallibility. He does not learn from history, but yearns repeatedly for a success where none has come before. What success he has known (in medical treatment of disease, etc.) is quickly translated into political terms. What is wrong politically can be eradicated as easily as malaria.

The Christian man knows that problems do not lie so much in the world as within himself. Unless man is changed by a good God, there will be a very limited goodness in the world. The secular man knows how to cure malaria, but he cannot manage to actually share that goodness with the world. The world (the third world) dies as it has always died. The secular man is powerless because he lacks true goodness.

The Christian man is largely marginalized in our modern world. He is considered an artifact of the past. However he is not a religious artifact – the truth he knows is eternal and is as applicable to the ills of the world as any part of the truth of God.

It is for this generation to understand what it means to be a Christian man and not to compromise with the secular man. God is good and wills good for all people. He is not a utilitarian, wishing the greatest good for the greatest number, but willing good for each and every soul.

May Christians be visible everywhere, and everywhere loyal to the Kingdom of God.