Seeing and Acknowledging the Wounds of our Soul: On the Canon of St. Andrew of Crete 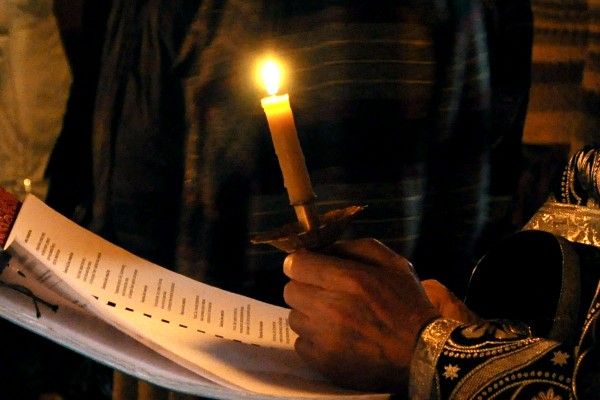 Photo: psgp.ru
During the first week of Great Lent in the Holy Orthodox Church, we recite the theologically profound Canon (hymn) of St. Andrew of Crete. This huge hymn is divided into four parts and read Monday through Thursday evenings in the first week of Lent, and in its entirety on Thursday of the fifth week. This hymn, written in the eighth century, is a school for repentance.

The hymn is essentially a meditation consisting of commands and questions addressed to the soul urging it to repent of both mental and bodily sins. Allusions are made to biblical characters and situations, likening the soul to the sinners and urging the soul to flee sin as the righteous have:

By my own choice have I incurred the guilt of Cain’s murder. I have killed my conscience…
O my soul, you have followed Ham, who mocked his father. You have not covered your neighbor’s shame.
Flee, my soul, like Lot from the burning of sin…flee from every flame of animal desire.

As you listen to or read this hymn, the observations, commands and questions that St. Andrew addresses to his soul mysteriously become questions you are asking of your own soul. It is as though you are standing outside yourself examining yourself and commanding yourself to repent.
One of my favorite verses typifies the Orthodox Christian understanding of sin and the effects of sin:

David the forefather of God once sinned doubly, pierced with the arrow of adultery and the spear of murder.

Although David himself confesses that his sins, adultery and murder, were primarily sins against God, “Against You only have I sinned and done that which is evil in Your sight” (Psalm 50/51: 4), the problem the sins manifest are not primarily legal or covenantal. This double sin does not create a legal problem before God so much as it manifests a medical emergency of the soul. David had been pierced by the arrow of adultery and the spear of murder. David had been wounded–and wounded people wound others. A wounded soul contemplates sin, and what we contemplate eventually determines what we do.

The remedy for David, and for all wounded sinners, lies in his confession and repentance, not so that God can forgive him in some legal sense of the word; but so that David can see reality as it is, so that he can agree with God (confess/ homolegeo/say the same thing as), and so he can begin to ask God for mercy and thus begin to be healed. Two verses later, St. Andrew writes:

David…composed a hymn setting forth as an icon the action he had done; and he condemned it crying: “Have mercy on me….”

The Canon of St. Andrew, all of Great Lent for that matter, makes no sense so long as one sees sin as legal problem before God. Indeed, if sin were merely a matter of paying a debt–which has been paid once and for all in Christ–why would one need to continually repent? But sin is not essentially a legal problem; rather, it is a wounding of the soul, a wounding of which I may be largely unaware.

Nevertheless,the evidence of this wounded soul exists in my thoughts and actions which,

“Like Israel before you…instead of the divine manna…[you] senselessly [prefer] the pleasure-loving gluttony of the passions…. The swine’s meat…and the food of Egypt you…[prefer], my soul, to the food of heaven.”

The fact that my thoughts and actions continue to imitate the children of Israel in the desert rather than Moses on the mountain is evidence that I am still gravely ill.

Like David, I must set forth as an icon the thoughts and actions I have entertained and committed, and condemn them. Like a wounded man, I must first acknowledge that I am not healthy, so that I can submit to the Physician and the therapy which will bring me healing.

This is what the Great Canon of St. Andrew of Crete is about. It is about seeing and acknowledging the wounds of our soul, it is about confessing our sickness–even if we do not quite feel sick at the moment. By reviewing the great sins–and the great repentances–of the Bible, St. Andrew helps us see that our soul is indeed wounded by sin. And we also see that no wound is so great that it cannot be healed through repentance.