St. Ignatius (Brianchaninov): “The Activity of Prayer Is the Highest Activity of the Human Mind” 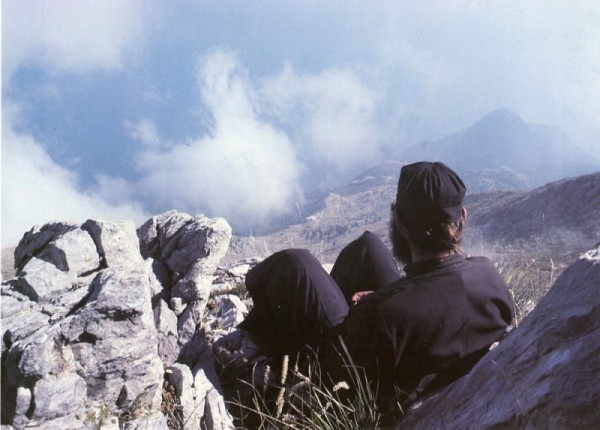 The one who seeks corruptible earthly blessings in his prayer rouses the indignation of Heaven’s King against himself. The angels and archangels-His courtiers-behold you during your prayer, they see what you are requesting from God. They are surprised and rejoice when they see an earthly creature leave the earth behind and make a request to receive something heavenly, but they mourn for the one who ignores the heavenly and asks for earth and decay.

We are commanded to be children in malice, but not in understanding (1 Corinthians 14:20).

During prayer, the reason of this world, which is verbose and conceited, is cast off; this does not mean that feeblemindedness is applied or required. Perfected reason is required, spiritual reason, filled with humility and simplicity, which is often expressed in prayer not through words, but by prayerful silence which surpasses words. Prayerful silence then envelops the mind, when suddenly new, spiritual understanding appears to it which is inexpressible in the words of this world and age, when an especially vivid feeling of God being present arises. Before the inscrutable greatness of the Divine Being, His feeble creature, man, falls silent.

Vain repetitions (Matthew 6, 7-8), condemned by the Lord in the prayers of pagans, consist in multiple requests for temporal blessings, which fill the prayers of pagans, as well as the eloquent manner in which they are made, as if rhetorical flourishes, material sonority and the power of the word can act on God in the same way that they act on the hearing and nerves of people of flesh. In condemning this verbosity the Lord did not at all condemn prolonged prayers, as it seemed to some heretics: for He Himself blessed prolonged prayer by being in prayer at length. And continued all night in prayer to God (Luke 6:12) as the Gospel recounts of the Lord.

The lengthiness of the prayers of God’s saints is not due to verbosity, but to their abundant spiritual feelings, which are manifest in them during prayer. Time, so to speak, is destroyed by the abundance and strength of these feelings, hence it is transformed into eternity for the saints of God.

When the one who prays achieves attainment in his holy podvig, then the variety of thoughts in the psalms and other words of prayer does not correspond to his disposition. The prayer of the tax collector and other very brief prayers give a more satisfactory expression of the inexpressible, expansive desire of the heart and God’s saints have often spent many hours, days and years in such prayer without feeling any need of variety of thoughts for their powerful, concentrated prayer.

Prayers composed by heretics are immensely similar to the prayers of pagans: there is verbosity in them, the earthly beauty of the word, the inflaming of the blood, a lack of repentance, striving for the wedding-feast of the Son of God from the pagan temple of the passions itself and delusion. They are alien to the Holy Spirit-the deadly infection of the dark spirit wafts from them- the spirit of the evil one, the spirit of lies and destruction.

How great the activity of prayer is! The holy apostles refused to serve their neighbours in their fleshly needs, in order to pray and to serve the word. It is not reason, they said, that we should leave the word of God and serve tables… We will…give ourselves to prayer, and to the ministry of the word, ( Acts 6:2-4) meaning in conversation with God through prayer and in conversation about God with their neighbours, proclaiming the Triune God and the Word of God made man to them.

The activity of prayer is the highest activity of the human mind; the state of purity, estranged from distraction, which is granted to the mind by prayer, is its highest natural state; the mind’s rapture in God, of which the primary cause is pure prayer, is a supernatural state.

Only the holy saints of God arise to this supernatural state who, having been renewed by the Holy Spirit, having taken off the old Adam and been clothed in the New and able with the open face of the soul to behold the glory of the Lord, are being transformed into the same image…from glory to glory by the action of the Spirit of the Lord. (2 Corinthians 3:18). They receive most of their Divine revelations during the exercise of prayer, as this is a time when the soul is especially prepared, especially purified and inclined to communication with God. Thus, the holy apostle Peter saw a special sheet descending from heaven during prayer (Acts 10:11). Thus, an angel appeared to Cornelius the Centurion during prayer (Acts 10: 3). Thus, the apostle Paul was praying in the temple at Jerusalem when the Lord appeared to him and ordered him to leave Jerusalem immediately. Depart, for I will send thee far hence unto the Gentiles, He said to him (Acts 22 17:21).

When reading the Gospel, do not seek pleasure, exaltation or brilliant thoughts. Seek to see the infallibly holy…