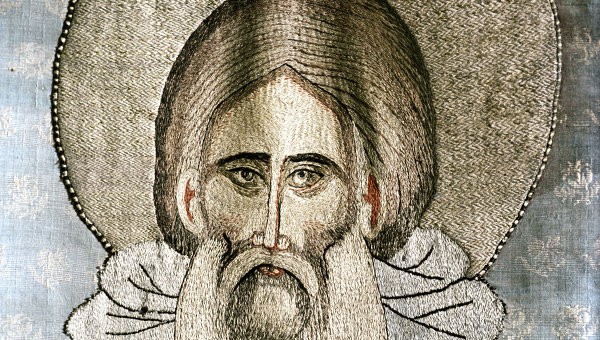 Their sound is gone forth into all the earth… 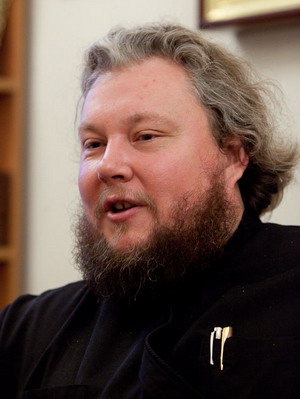 Today I would like to remember Saint Sergei of Radonezh and the memory of finding the holy relics which we are celebrating.

The name of this amazing saint is known to every Christian, not only Orthodox, but to those living outside the country and professing faith in Christ. In Russia alone, there are almost six hundred temples having either a high altar or a side-alter consecrated in honor of the Saint. This is a great testament.

He was born at the beginning of the XIV century, during the Mongol invasion, enslavement, and apogee in relations between Rus’ and the Horde. For us, this Saint is not just a historical memory. The memory of it gives us an essential moral lesson.

We live today in a complex society. Each of us is part of the state. Your conduct as a citizen and as a part of society is extremely important.

The life of St. Sergie clearly testifies to these relations and about the values that a person chooses.

St. Sergei didn’t think about his authority and significance to people. He retired from the world. We can say, he struck himself from it. He went into the forest of Radonezh and settled in such an ascetic environment that even his brother couldn’t bear the hardships that lay on the shoulders of the young hermit. For St. Sergei, there was only God and prayer.

That prayer extended the borders of hermitage and attracted many people — both simple and noble.

That choice and the fortitude of the Saint is very important for us.

The Saint lived at the time of two holy hierarchs, St. Aleksei of Moscow and his successor St Cyprian. It was a difficult period for Holy Rus’ — first, gathering the country around Moscow, and second, the struggle for power — not only princely, but also spiritually. In these moments, the Saint is our example of being loyal to God. He was outside all these events and at the same time was an active participant.

One can simply be an outside witness to that struggle, without participating in it — and the wisdom of God can rectify the situation. This for us is the clear image of St. Sergei.

The Saint against intrigue

When Saint Aleksei was already weak, he saw the Saint as his successor. The Saint categorically refused. It was inconceivable for his spiritual dispensation. After the death of the Saint, we see an active struggle among clerics to be the Metropolitan of Kiev, Moscow, and all Rus’.

There was intrigue at the time of Prince Dmitriy Donskoy  — who we also revere as a saint, thanks to Saint Sergei! A friend and protege of the prince, quickly became Archimandrite and then a candidate to be the Metropolitan. The fight actively involved Saint Dionysius of Suzdal. All candidates rushed to Constantinople, in which there was also a difficult situation at the time that prevented the candidates for the bishoprics of Rus’ to exercise control, and so the emperors and patriarchs were hastily replaced…

In this struggle, the Saint remained himself — he and God. When Saint Cyprian — legal and canonical — was sent to be Metropolitan of Moscow, Prince Dmitriy Donskoy didn’t accept him. He humiliated and robbed him and expelled St. Cyprian from outside his principality. What did the Saint do? He stopped communicating with the prince. Seeing the power of his authority and the depth of his advice, the prince was forced to reform, to come to terms with it, to be different, to discard his human ambitions, and to follow the instruction of the elder.

We know from the history of this story: Prince Dmitry Donskoy receives a blessing from the Saint before the Battle of Kulikovo . While it was a blessing it was not just a prayerful intercession before a saint, but an act of repentance. The Saint didn’t accept the Prince or bless him, but required him to humble his pride in exchange for it — justification in the eyes of God. The blessing on the eve of the Battle of Kulikov is the result of the Prince’s repentance. 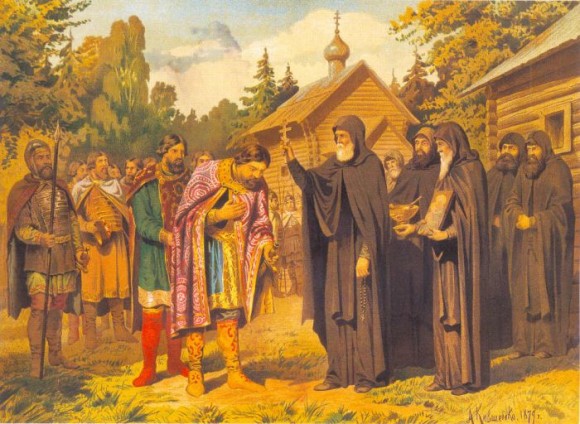 After the Battle of Kulikov, when the Lord bestowed victory on the Russian troops and all of Rus’ was united on the field at Kulikovo, we again see the result of the actions and words of St. Sergei, who was praying during the battle. The Prince receives St. Cyprian, one of the wisest men of his time.

Today, we know little about Saint Cyprian, but he was very active and educated man. Through him, Holy Rus’ was perceived as holy and very close to the spirit of St. Aleksei and St. Sergei of Radonezh. St Cyprian started to reform the Divine Service in Rus’ and bring them the Athos tradition of tacit prayer. The Kiev Psalter and miniatures which still inspire and delight us, was composed by a protodeacon of Metropolitan Cyprian. The Saint worked hard on translations of South Slavic manuscripts in the language familiar to Rus’ and conducted Divine Worship in a dignified manner.

The disciples of St. Sergei had special conversation.

More than forty disciples grew up with that prayer book, and more than forty established cloisters! Among them are such pearls and outposts of the spiritual life as the St. Cyril-Belozersky Monastery, Ferapontov Monastery, Savvino-Storozhevsky monastery …

All of this is the work of the ascetic preferring quiet prayer.

In connection with the image of St. Sergei, I want to draw attention to the vivid testimony he gave of the commandments of God. Despite his desire for the monastic life, he bore the commandment to respect and care for his parents until the very end. Today, many people come and complain: “Dad and Mom interfere with my spiritual life! They don’t let me go to the monastery or the holy places!” In response to this, I always cite the example of St. Sergei, who was near his parents, being obedient and fulfilling the commandment of God. Only after conducting his parents through their entire earthly path did he find it possible to start his own spiritual activity in the monastic life.

Take heed of yourselves, brothers!

The image of the Saint is to be clear and instructive for us. We shouldn’t just think about this Saint, but apply his thoughts and way of life in our own lives.

I would like to remember the dying words of the Saint that was conveyed by his disciple, who first compiled his hagiology.

St. Sergei believed self diligence most important: “Take heed of yourselves, brothers! Above all else, have the fear of God, purity of soul, and love unfeigned. ”

These words have become a covenant for us all.