Metropolitan Hilarion: St Sergius is rightly called the Hegumen of the Russian land

Source: DECR
Metropolitan Hilarion (Alfeyev) | 21 July 2015
On 18 July 2015, the commemoration day of St Sergius of Radonezh, Metropolitan Hilarion of Volokolamsk, chairman of the Moscow Patriarchate’s Department for External Church Relations, officiated at the Divine Liturgy in the Church of the Descent of the Holy Spirit upon the Apostles at the Laura of the Holy Trinity and St Sergius with the blessing of His Holiness Patriarch Kirill of Moscow and All Russia. 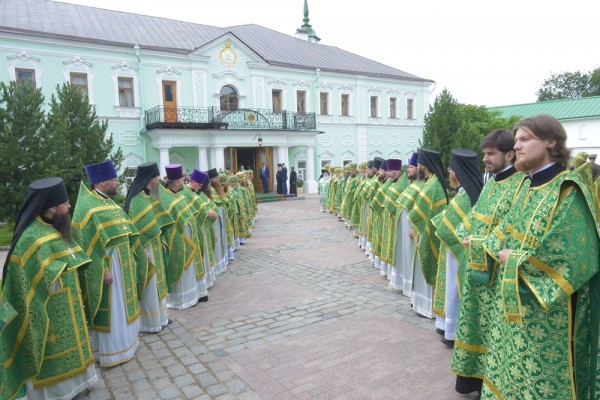 Concelebrating with His Eminence were Metropolitan Pavel of Khanty-Mansiysk and Surgut, Metropolitan Vladimir of Chita and Petrovsk-Zabaykalsky, Bishop Anatoly of Kagul and Komrat, Bishop Flavian of Cherepovets and Belozersk, and ordained brethren of the monastery.

After the service, Metropolitan Hilarion delivered a homily, saying in particular:

“Every time we assemble in the Laura of the Holy Trinity on the commemoration day of St Sergius, we celebrate the Liturgy in all churches of the monastery. We pray to the Hegumen of the Russian land, asking him to protect our Church by his heavenly blessings, help her perform her salutary mission, and preserve this holy Laura as the centre of monastic life, where during many centuries monks have been lifting up their unceasing prayers to God, performing their monastic feat.

In every new generation God chooses those who want to follow monks of the past. It always remains a mystery for us why people, inspired by the feats of the holy fathers, forsake all the pleasures of the world and embark on the narrow path of monastic life.

The reason is that the Lord Himself calls these chosen people to perform this ministry and this feat.

During His earthly life, Jesus Christ Himself chose His disciples, calling them for the lofty service. He called twelve Apostles, and then another seventy Apostles. They all but one followed after Him, listened to His words, and were eyewitnesses of His miracles. After His Ascension, the gift of the Holy Spirit was conferred on them, and they began to preach the Gospel of the Kingdom, which Christ had preached during His earthly life.

The Saviour preached among the Jews, and His disciples spread the Gospel to the ends of the earth. That was how our Holy Church was build up – through the feat of the Apostles and saints, equal-to-the-apostles, such as the holy Prince Vladimir. This year marks the millennium of the demise of St Vladimir, and in less than two weeks we will take part in the commemorative events in Moscow, in Kiev, and in other cities and towns of the Holy Rus’.

St Sergius, as well as Ss Anthony and Theodosius, founders of the Russian monastic tradition, is rightly called the Hegumen of the Russian land. In the time of internecine strife, when our country was suffering under the Tartar-Mongol yoke, St Sergius revived the monastic life in the Russian Orthodox Church. Having hidden himself in a dense forest, he led a solitary life in prayer and labours. Hardly anyone could believe back then that seven hundred years later a magnificent monastery would stand in the place of the forest, and that every time on the commemoration day of St Sergius the Laura would welcome hierarchs of the Russian Orthodox Church, clergymen, monks and nuns, and tens of thousands of pilgrims from various countries, who would come here to venerate the wholy relics of St Sergius and lift up a common prayer to him.

Today we glorify St Sergius as our heavenly intercessor and patron. We know that he hears our prayers and helps us. At the holy relics of this great saint, pleasing unto God, we are praying for the whole Russian Orthodox Church, asking for his intercession, so that the Lord would preserve our Church and our earthly homeland and maintain peace in our land, and so that all internecine conflicts would cease and God’s peace would always reign in people’s hearts.”

After the Liturgy, His Holiness Patriarch Kirill of Moscow and All Russia and all the hierarchs who, upon his blessing, celebrated the Liturgy at various churches of the monastery that day, came out to the Laura’s square where the Primate of the Russian Orthodox Church said a thanksgiving.