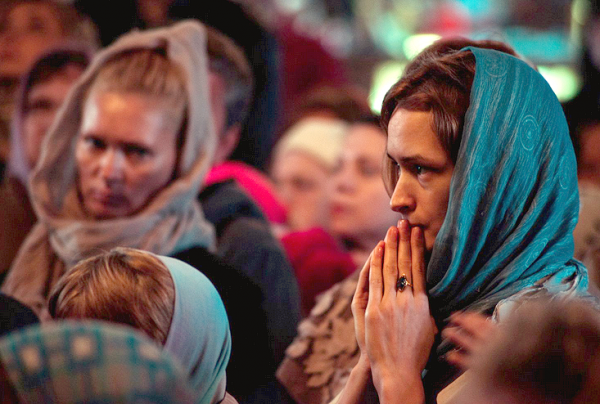 “You call out, ‘Christ is risen’ and you believe that your god is risen, but you die!”

This is a realistic and logical challenge. But what is our response? Our faith in the Resurrection rests upon Christ’s promise.

“How dear, O Christ, and how sweet is your voice that promised us that you will be with us to the end of the age.”

We have no other proof that we will not die than the Resurrection of Christ and His promise to us, just as He prayed to the Father, that wherever He is He wants us to be there with Him, and that just as He is in glory, we will participate in it with Him and be like Him. In the final resurrection, He will give us that body that He took in the Resurrection. And so the question is: did Christ really rise. If His promise is true, then our resurrection is necessarily the consequence. This is why the Apostle Paul says,

“If Christ is not risen, then our whole faith is in vain.”

Proofs of Christ’s resurrection began with the Christian martyrs, and Paul was one of the first of them, who saw Christ at the gates of Damascus. Wherever he went, he would stand and tell about how he saw Him and that He is alive. Like him were many martyrs who died for the sake of this testimony, in order to tell of Christ’s resurrection. But someone might say,

“Despite someone’s testimony and martyrdom for the sake of his faith, in this case faith in the Resurrection, this proves the sincerity of his faith but it does not necessarily prove the truth of his testimony.”

There is a second proof that strengthens Christians’ testimony of the resurrection of the Lord, which is very strong, external testimonies of the Lord’s resurrection from non-Christians of that time, Jews and pagans, as well as many historical manuscripts and books.

However, the strongest, most decisive, and final proof, of which there is no doubt, is the resurrection of the Church. All of us remember, in our prayers, how the Lord’s disciples left their Master and fled (they returned to their trades and went back to fishing). Likewise, there is the example of the disciples on the way to Emmaus, who did not revive their dashed hope, despite all that the Lord explained to them from the scriptures, until He broke bread for them. The fact that those who fled returned to preaching the Gospel, even unto death, is because they discovered the truth of what they knew (and they are a group of good and truthful people), that they were now bearers of the most important truth for human life, which is the resurrection of Christ.

“Is it possible to raise the dead and give life, as the Apostles did, in the name of someone who is dead?”

In the early Church, adults were converted first, and not children. This is why baptism was the entrance of adults into the Church and why each convert to the faith would usually wait during the period of the Great Fast  for learning Christian doctrine and repentance, and then on Holy Saturday and Easter would come baptism. Easter, as the day of the Resurrection, was designated as the day of baptism for those who heard, believed and had faith in the news of the Resurrection. The Resurrection is the new good news for them, and on the Day of the Resurrection they began their new Christian life. For this reason Easter was, and must remain, connected to a complete change of life from pagan to Christian. From this came some of the customs of Christian worship, such as lights, candles, white clothing, and other things in the service of baptism, which entered into the Easter service.

We return to the first question and challenge, which is—what is the role of Christ’s resurrection in our life? This is the challenge, that Christ really rose from the dead as a proven historical event, but an event that always requires proof and it is in our hands and in our wills a life-changing event, just as Easter was in the beginning in the life of the Church.

There is no doubt in Christ’s resurrection, but the challenge is on the level of reflecting His resurrection in our life and of applying it.

Christ is risen! Indeed He is risen!

Most viewed articles
Last Man Standing187
Metropolitan Hilarion Speaks on Whether It Is Possible for ROC to Reunite with Old-Believers169
Businessman Buys a 19th Century Church and Returns It to the Faithful69
Turning Trials Into Hope64
Metropolitan Onuphry: People Get Strength for Life and Salvation in the Church61
The Temple of Woke: Are Universities Basically New ‘Religious’ Training Centers?34
Most popular authors
Pravmir.com team300
Archpriest Geoffrey Korz188
Fr. James Guirguis64
Eric Hyde37