Sunday of the Myrrh-Bearers

How often in our lives we lose our faith when we must go through illness, inconvenience, suffering, and sorrow. At times it seems to us that our God is dead, that He does not hear us, that some armed people do not let us through, or that there is a large stone in our path and “who will roll away the stone for us…?”. So we sit shut up in our pain and sorrow, hiding in fear.
Priest Sergei Sveshnikov | 02 May 2009

Dear brothers and sisters in the Lord, Christ is risen! 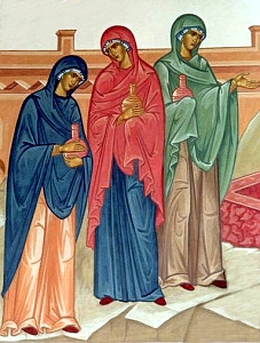 Today the Church celebrates the memory of the holy myrrh-bearing women. The holy women were faithful disciples of Christ and always remained near the Lord in His earthly service. They listened to his preaching in Galilean synagogues, walked with Him to Jerusalem, were present at the resurrection of Lazarus, cried with the Mother of God at the foot of the Savior’s Cross and followed Joseph and Nicodemus to the tomb. They spent the hours following the Crucifixion in pain and agony with what was left of the Lord’s disciples. Undoubtedly, their hearts burnt with the desire to run to the Lord, but they observed the Sabbath with other Jews “because that sabbath was a day of great solemnity” (John 19:31 NRSV).

Yet the sacred day of the Sabbath of the Great Stillness came to an end, and with the first rays of the rising sun, having gathered all that was necessary for burial, the holy women hurried to Him, whom alone their hearts desired, to their beloved Teacher (Mark 16:2). Did they believe in the resurrection of the Savior? Did they remember the sermons of the Teacher? Did they recall the festive entrance of the King into the Holy City and the children singing, “Hosanna! Blessed is the One Who comes!” (John 12:13)? Even if they still had any hope for a miracle, like that of the resurrection of Lazarus, this hope was now lying mocked, spit upon, broken, crucified, pierced with a spear, in the tomb with their beloved Teacher. The holy myrrh-bearers walked to the tomb with perfumes and burial cloths (Luke 24:1), not processional banners, to prepare a dead man for his last journey, not to meet the risen God. The sorrow of the holy women was so great, that even when they saw the wide open tomb they did not understand what had happened (Luke 24:4), even having seen the risen Lord, Mary Magdalene thought that He was the cemetery gardener (John 20:15).

How often in our lives we lose our faith when we must go through illness, inconvenience, suffering, and sorrow. At times it seems to us that our God is dead, that He does not hear us, that some armed people do not let us through, or that there is a large stone in our path and “who will roll away the stone for us…?” (Mark 16:3 NRSV). So we sit shut up in our pain and sorrow, hiding in fear (John 20:19).

Yet the holy myrrh-bearers bring the good news to us as well, “Arise from your sinful slumber! With the first ray of sun, run to the Lord!” And what do we see? We are too late with our tears and burial ointments—the tomb is empty! No, God does not even run out to meet us half-way (Luke 15:20)—He completed everything that is needful for our salvation: he already broke the bonds of hell and defeated death. He already goes ahead of us to Galilee (Matthew 28:7)—His homeland. All that is left for us at the empty tomb is his message: do not be afraid, hurry, tell everyone, the Lord is waiting for you at home (Matthew 28:10).

Through the prayers of the holy myrrh-bearing women, Lord, grant us their all-conquering faithfulness to You! Amen.