Source: CatholicCulture.org
Natalya Mihailova | 08 August 2015
Catholic prelates from Iraq and Syria charged that US immigration officials are discriminating against Christian refugees from the Middle East. 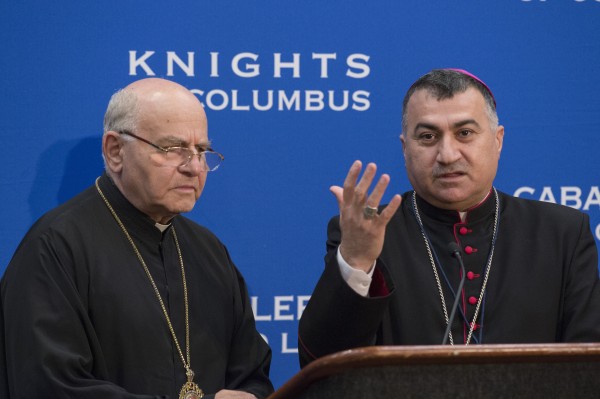 Speaking in Philadelphia to the national convention of the Knights of Columbus (KofC), Archbishops Bashar Warda of Erbil, Iraq, and Jean-Clement Jeanbart of Aleppo reported that only a tiny number of Christian refugees have been approved for visas to come to the US; Muslim refugees have been approved at a significantly higher rate. “Our people are asking these questions: How come we apply for the American visa and are denied,” Archbishop Warda said.

The archbishops agreed that they would prefer for their people to remain in Syria and Iraq, if possible. But when they do apply for help to live abroad, Americans should treat them fairly, the prelates said. Archbishop Warda told the KofC: “Please remember this: this is part of your heritage, this is part of being an American. Please speak for the persecuted around the world, especially for the Christians today.”