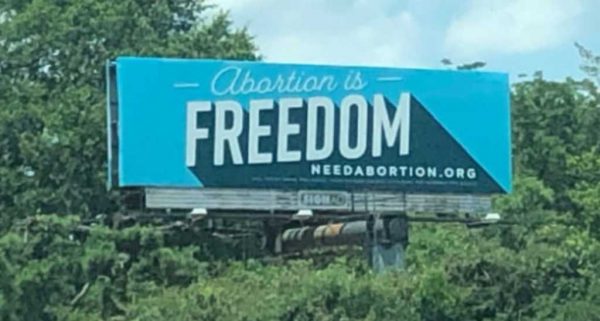 A Texas pro-life organization has issued a scathing response after two billboards were erected that declare, “Abortion is freedom.”

The billboards, paid for by NARAL Pro-Choice Texas and the Lilith Fund for Reproductive Equity, were spotted in Waskom, Texas and were put up in
response to the recent passing of an ordinance which outlawed abortion within the city limits and declared the town to be a “sanctuary city for the unborn.”

Now, after an article appeared in the Houston Chronicle bringing more attention to the vast advertisements, Mark Dickson from the pro-life group “Right to Life East Texas” said they were compelled to issue a response.

“First off, would like to thank NARAL Pro-Choice Texas and the Lilith Fund for reminding all of us of just how out of touch both of their criminal organizations are with the women they claim to represent,” the group noted in its statement on Facebook.

“From day one they have treated what happened in Waskom as what happens when “old white men” lead. It can also be said, from day one, these groups have ignored the fact that Waskom’s City Hall was full of women standing in favor of their city council’s decision on the day of the vote.”

In closing, the group corrected the Lilith Fund on its false assertion that abortion was still legal in the Texas town, despite the ordinance being passed.

“In the coming weeks more cities in Texas will be taking the same steps that the City of Waskom took to outlaw abortion in their cities and become sanctuary cities for the unborn.”

The group noted that “If NARAL Pro-Choice Texas and the Lilith Fund want to spend more money on billboards in those cities we welcome them to do so,” because, at the end of the day, the “more money they spend on billboards the less money they can spend on funding the murder of innocent unborn children.”