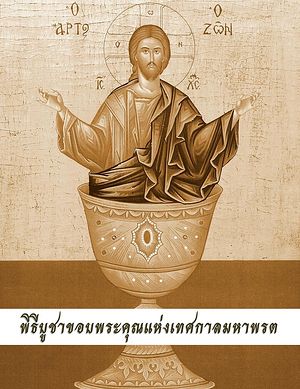 With the blessing of His Eminence Metropolitan Sergius of Singapore and Southeast Asia, the temporary administrator of the Thailand Diocese, the text of the Liturgy of the Presanctified Gifts has been published in the Thai language, reports the site Orthodox Church in Thailand.

Four new dioceses the Patriarchal Exarchate in Southeast Asia, including the Thai Diocese, were created recently at the session of the Holy Synod on February 27. The Diocese of Thailand covers Thailand, Cambodia, Laos, and Myanmar

The book was published under the general editorship of Archimandrite Oleg (Cherapanin), the secretary of the Thai Diocese. The sacred text was translated by students of the theological school in Phuket Deacon Viktor Taikokan and Nicholas Keblang, under the supervision of school rector Hieromonk Paisy (Ipate).

The publication will be distributed to the parishes of the Thai Diocese and available online at the site of St. Innocent College, the Educational Center of the Orthodox Church in Thailand of the Moscow Patriarchate.

The text of the Paschal service was translated into Thai and published last year in time for Pascha, and another book containing the order for Great Vespers, Festal Matins, the Hours, and the Divine Liturgy was published a few months before that. The Orthodox Church: History and Teachings by Bishop Alexander (Mileant) was also published at that time.

The catechetical book The Law of God by Archpriest Seraphim Slobodskoy was printed in Thai in 2012, and a book on the history of Christianity in 2013.