“As Jesus approached Jericho, a blind man was sitting by the roadside begging. When he heard the crowd going by, he asked what was happening. They told him, ‘Jesus of Nazareth is passing by.’ ”

Beggars would often be found at the city gate where people are passing in and out. He is probably used to calling out to those who pass by, asking for money, begging for alms.

Blindness and diseases of the eye were common illness in the ancient world.

Those who lost one of their senses would often develop their other sense much more. But it takes no special insight for the blind man to realize that the number of people on the road crowding into the city is much large than usual.

A pushing, shoving crowd competes to stay up with someone who attracts their attention. The blind man cries out to whoever can hear him, “What is going on?” And one of the bystanders says, “Jesus of Nazareth is passing by.”

Once he is told that Jesus of Nazareth is passing by, he begins to yell at the top of his lungs:

But this is no helpless, feeble cry for help. It is loud and insistent. He keeps on shouting. He won’t be shut up, even though the crowd continues to tell him to stop.

Some people are intimidated and subdued by their own handicaps. It’s possible to almost give up. But not our Blind man.

What motivates his uncontainable cry for healing? Faith. 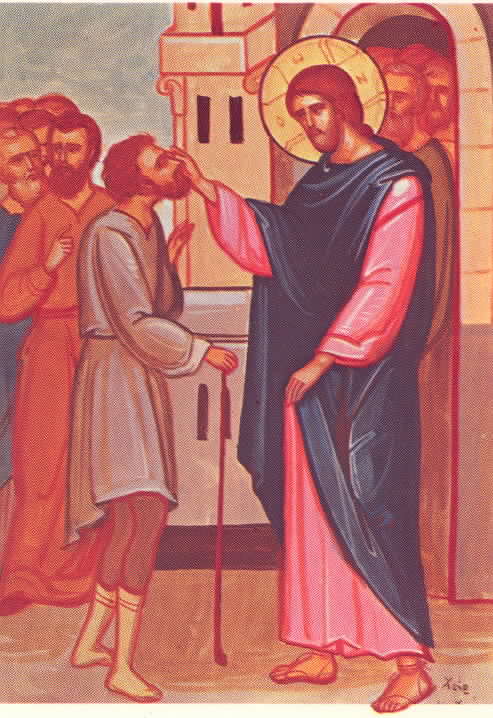 To call someone “Son of David” as a title is equivalent to calling someone, “Messiah,” for it signifies to the Jews a person who is the promised descendent of David who will sit upon the throne of Israel.

During most of his ministry, Jesus doesn’t encourage others to refer to him as the Messiah, because the political implications of this title would soon prevent him from being able to minister effectively (Matthew 16:16, 20). But now his hour is come. His face is set towards Jerusalem where he will be crucified.

The blind man’s request for mercy uses the same words that other beggars use. But this beggar’s address to Jesus is startling. When he asks the “Son of David” for mercy, he is expecting far more than money. And he has faith that the Son of David, the Messiah, will grant his request.

“Jesus stopped and ordered the man to be brought to him. When he came near, Jesus asked him, ‘What do you want me to do for you?’

But why does Jesus ask the obvious? I can think of two reasons: (1) to energize faith and cause it to be vocalized, or (2) to help the person himself determine what he wanted from Jesus. This question is nearly unique to Jesus’ ministry.

The fact is, some people do NOT really want to be healed — a blessing, a prayer, perhaps, but not real healing.

In the case of Blind man, Jesus is trying to get him to vocalize his faith, since Jesus responds to him, “Receive your sight; your faith has healed you.”(18:42)

Jesus speaks a word, a command for healing, and the healing takes place immediately.

What is so special about the blind man’s faith? Once he hears that Jesus is there, he immediately begins to ask mercy of Jesus as Messiah, exhibiting insight into Jesus’ true mission. But he also has an unstoppable faith, a faith that won’t take no for an answer. The crowd tells him to shut up, and he calls out all the louder. People are embarrassed as the local beggar goes ballistic when Jesus comes to town, but he doesn’t care. He has an intensity of desire that overcomes obstacles, rebuke, and embarrassment to achieve what he desires. Jesus is pleased.

Jesus is a bridge to the Father, always pointing people to a relationship with the Father. Jesus is trying to make people trust God on their own. Many can see Jesus only, but Jesus keeps encouraging their faith and pointing them to the invisible Father. We also can serve as bridges for people. At first, they are often VERY dependent upon us. We shouldn’t be afraid of that, but not seek it. Rather we should see it as a stage of faith. Our goal is to help transfer their faith in us to faith in their Heavenly Father. Only when we have achieved this have we succeeded, only then have we become like Jesus.

“Immediately he received his sight and followed Jesus, praising God. When all the people saw it, they also praised God.” (18:43)

He now is ready. He is a man of faith, and is more than ready to leave begging and take up giving to others.

This blind man serves a tremendous encouragement to others who are in the same physical or spiritual that he was.

The story of the blind man now known to the church as Bartimaeus is a powerful example to us of how it pleases Jesus for our faith to see its opportunity, grasp it, and refuse to let it go until we receive what we need from God. Who would have thought this beggar would instantly become a giver!

The fathers also give a spiritual interpretation to this miracle, with the blind men symbolizing future generations who would come to faith only by hearing, without the benefit of seeing Christ in person (see Jn 20:29). Those who tried to silence the blind man are persecutors and tyrants who, in every generation try to silence the Church. Nevertheless, under persecution the Church all the more confesses Jesus Christ and calls us to do the same.

Brothers and sisters let as ask ourselves what can our faith help us become?