The Challenges of Closed Communion

As an Orthodox priest, I cannot tell you how many times I have had to face someone, whether within my parish or a visitor from outside of it, and tell them that for one reason or another, they will not be able to partake in the Eucharist.
Priest Richard Rene | 21 July 2011

As an Orthodox priest, I cannot tell you how many times I have had to face someone, whether within my parish or a visitor from outside of it, and tell them that for one reason or another, they will not be able to partake in the Eucharist.

Closed communion—it couldn’t possibly sound more negative. It implies judgement, exclusivity, and moral superiority—all qualities that a pluralistic, democratic and egalitarian society despises. And yet, without a doubt, the Orthodox Church is a closed communion: only those who are baptized members of the Eastern Orthodox Church, who offer a regular confession and who fast and pray in preparation, may receive the Eucharist.

Why does the Orthodox Church practice this policy? It is one thing to exclude those who are not Christians at all, but how can we dare to judge the hearts of other Christians, and exclude them from communion with their Lord and Saviour?

Even writing those words conjures up in my mind the hurt and anger I have seen in the eyes of those who have asked the questions.

Let me endeavour today to answer as briefly but completely as I can.

The closed communion policy of the Orthodox is rooted in our understanding of the nature of the Church as the Body of Christ on earth. (see Romans 12:5 and elsewhere) As the Body of the Christ, the Church is an incarnate reality; that is, it is concrete, distinct and historical—existing continually and integrally since the time of Pentecost.

What makes individual Christians members of this one Church is participation in the Eucharist. The Apostle Paul is explicit: “The cup of blessing which we bless, is it not the communion of the blood of Christ? The bread which we break, is it not the communion of the body of Christ?” (1 Corinthians 10:16) A consistent reading of the New Testament shows that this ‘cup of blessing’ and ‘one bread’ is nothing less than Christ’s own Body and Blood, which He gave to His disciples at the Last Supper. And according to the Apostle Paul, “Because there is one bread, we who are many are one body, for we all partake of the one bread.” (1 Corinthians 10:17)

In the Orthodox understanding, communion is the joining of individuals to each other, not just in the present, but throughout history, from the beginning of the Church and into eternity, with the saints who have come before us and who even now surround us as a “cloud of witnesses.” (Hebrews 12:1) And what brings all of us into this “communion of saints” is nothing less than our Eucharistic union to the one Jesus Christ who has been proclaimed and handed down from when He taught His disciples His true identity. (see the account in Luke 24)

To put it even more simply, Orthodox communion is not just you or I communing with our own personal Jesus, but you and I being united together in the same Jesus proclaimed by the apostles and those followed them through the centuries. 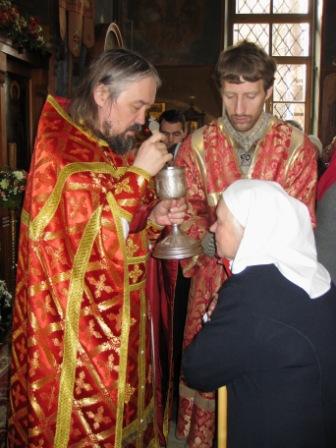 This understanding raises two basic challenges for Christians, Orthodox or not. The first is, who is the Jesus with whom we commune? If you believe that Jesus was a simply good man and wise teacher whose purpose was to make the world a more just and peaceful place for people of all faiths, while I believe that He is God in the flesh who is the only way to the Father, then you and I believe in different two different persons named Jesus. In the Orthodox view anyway, our receiving the Eucharist together would be meaningless act.

For that matter, why would you wish to receive the with an Orthodox Christian who believes that his Jesus makes it possible for us to paint and venerate icons as a consequence of His sanctifying the physical world in His Incarnation? If you believe that icons are a form of idolatry or dead religion, why would you insist on sharing the one cup and the one bread with someone whose beliefs are so contrary to your own?

Suppose for the sake of argument, then, that you and I come to accept and believe in the same Jesus. Why can’t you receive the Eucharist with me and then continue attending and receiving the Eucharist at any church you happen to attend?

In the first place, there is a question of consistency. To uphold one understanding of communion in one Church, and another understanding somewhere else seems (if you don’t mind me saying so) a little like a kingdom divided against itself…

In addition, is another question raised by the policy of closed communion: accountability. The New Testament would seem to say that being members of the one Body of Christ through participation in the one bread of the Eucharist makes us accountable to one another. After all, “there should be no schism in the body, but that the members should have the same care for one another.” (1 Corinthians 12:25) Given this view, how can it be okay to wander from church to church, practising a ‘me and Jesus’ faith, without answering to anyone?

Either communion is an act of personal piety between an individual and Jesus (which is inconsistent with the New Testament), or it is an act by which an individuals are joined to a specific community in which they are both answerable to and responsible for the care of every other member of that community. There is no middle ground.

In the end, closed communion is not merely the unpleasant practice of an exclusive Church. It is a challenge for all of us to ask 1) Who is Jesus? and 2) What is communion? I invite you to take these questions forward in your thoughts. May they goad you to a richer encounter with the crucified and risen Christ and His living Body on earth. 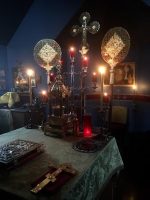 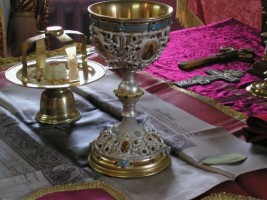 On the Participation of the Faithful…
Natalya Mihailova

The Eucharist is the main Sacrament of the Church, instituted by our Lord Jesus Christ on… 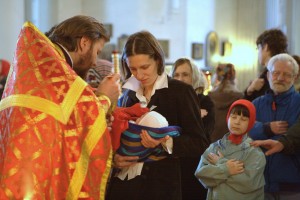 Humanity is created to be in communion with God, and the Eucharist is the realization of…