The Day of the Theophany: A Time to Remember Our Vows to God

What will happen if, on the last day of the history of mankind on earth, the day of the Dread Judgment, one who has given vows (or had them given on his behalf by his sponsors) does not even know what these vows are or what was promised? What will happen to such a person?
Metropolitan Philaret of Eastern American and New York (+1985) | 19 January 2012

On the Feast Day of the Theophany or Baptism of the Lord it is not superfluous for every Orthodox Christian to remember another Baptism, the Baptism that was celebrated over each one of us, Orthodox Christians, a Baptism at which each one of us, through the mouths of our godparents, vowed to God always to renounce Satan and his works and always to be conjoined and “united” with Christ.

This, I repeat, is especially becoming for the present day. The solemn rite of the Great Blessing of the Waters will now be celebrated. One may say that its central and primary part is the magnificent prayer in which the Lord is glorified and the grace of the Holy Spirit is invoked upon the sanctified water. This prayer begins with these beautiful words: “Great art Thou, O Lord, and wondrous are Thy works, and no word is adequate to sing the praise of Thy wonders!” Those who have been present at the celebration of the Mystery of Baptism and have listened attentively will know that the prayer the blesses the waters into which one will be Baptized begins with these very same words, and that the first part of this prayer is perfectly identical in both the Great Blessing of the Waters and at the celebration of the Mystery of Baptism. Only later, in the final part, does the prayer at the celebration of the Mystery of Baptism differ, as is appropriate for this Mystery at which a new human soul is Baptized.

Therefore it would do us no harm to recall the vows that are given at Baptism on behalf of us all. When someone is Baptized in adulthood, as now sometimes happens and as was particularly frequent in antiquity, he makes his vows on his own behalf; but if he is Baptized in infancy then his vows are made by his godfather or godmother, or “sponsors” as the Church calls them. These vows, in which Christians promise God to renounce Satan and all his works and to unite with and join Christ, are often not only forgotten, but many people do not even know the first thing about them, or that these vows were made for them and that they should think about how to keep them. 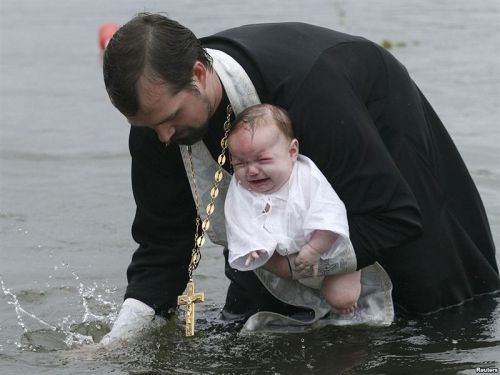 What will happen if, on the last day of the history of mankind on earth, the day of the Dread Judgment, one who has given vows (or had them given on his behalf by his sponsors) does not even know what these vows are or what was promised? What will happen to such a person? Consider, brethren, what it means to renounce Satan and all his works and to unite with Christ.

The present is a time when mankind has been seized by ungodly vanity, in which the enemy of mankind reigns and, as they used to say, makes nearly everyone “dance to his tune.” All this vanity, from which our present life is composed, is ungodly; God is not present in it, and it is hosted and directed by God’s enemy. If we have given vows to renounce Satan and all his works, then to keep it we must strive not to let our souls be oppressed by this vanity, but rather to renounce it, remembering, as the Church says, that there is only “one thing needful”: to remember that one must unite with Christ, that is, that one must not only fulfill His commandments, but also strive to unite with Him.

Think of this, Christian soul, on this luminous and great feast; think and pray that the Lord would send you firm faith and the determination to keep these vows, and not be absorbed by the vanity of the world and lose your connection with the Lord, with Whom you have promised to unite yourself forever.

Today’s feast is called the Feast of the Lord’s Baptism or Theophany; but those who know the Church Typikon well know that in this Typikon it is sometimes also called the “Feast of the Holy Theophanies” in the plural.

Why? Here is why: of course, the center of the present feast’s commemoration is that about which the choir today sang: “God the Word appeared in the flesh unto the human race.” The Incarnate Son of God, about Whose birth only very few knew at the time, has “appeared unto the human race,” for His Baptism is, as it were, the solemn commencement of His ministry, which He then performed until His death and resurrection.

Yet at the same time, today’s feast day is characterized by the fact that, as we sing in the troparion, it was namely on this feast day that “the worship of the Trinity was made manifest.” Each of the three Persons of the Holy Trinity appeared in His uniqueness for the first time, and it is for this reason that this feast, I repeat, is called the “Feast of the Holy Theophanies.” People heard the voice of God the Father: This is My beloved Son, in Whom I am well pleased; the Son of God received Baptism from John (and, incidentally, we know from the Gospels that John the Baptist was, at it were, at a loss when the Savior of the world approached him, and he tried to refuse Him); and the Holy Spirit in the form of a dove descended from the Father upon the Son. Thereby “the worship of the Trinity was made manifest” for the first time; this is why the Church sings this troparion and why it calls this feast day the “Feast of the Holy Theophanies.”

Christ the Savior appeared in order to begin His salvific ministry. Not long ago, on the Great Feast of the Nativity of Christ, we spoke of how the Lord, by being born in a squalid cave and deigning to lie in an animal manger, emphatically renounced all earthly glory, grandeur, and magnificence; for He did not deign to appear in royal palaces or wealthy chambers, but rather precisely in these poor and humble circumstances. He thereby immediately demonstrated that He had brought a new principle to the earth: the principle of humility.

Look at how He is, so to speak, true to Himself: how now, too, on today’s great feast, He clearly and undoubtedly shows us the same principle of humility. For where has He come? To the Jordan. Why? To be Baptized by John. Sinners had come to John, confessing their sins and being Baptized. But He was sinless, “untouched by sin,” absolutely free of it and pure; nonetheless He humbly stands in line with other sinners, as if He required this cleansing ablution with water. Yet we know that it was not the water than cleansed Him, most holy and sinless, but He Who sanctified the water by deigning to be washed by it, as we sang today during the Blessing of Waters: “Today the nature of the waters is made holy.” Thus, Jesus Christ brought the principle of humility to earth, and was faithful to it throughout His entire life. Yet this is not all. He left us a commandment: Learn of me; for I am meek and lowly in heart: and ye shall find rest unto your souls.

Recall another luminous, joyful, spring feast day: the Feast of the Annunciation.

The Most Blessed Virgin Mary hears how the Archangel brings the good tidings of what will be accomplished through Her: the Incarnation of God. What does Her most holy, pure, and immaculate soul say when she comes to Her cousin Elizabeth to share Her joy with her? She only says: My soul doth magnify the Lord: and my spirit hath rejoiced in God my Savior. This humility was the beauty of Her spirit. From the account of the Annunciation we know that the Archangel appeared to Her just as She was reading the prophecy of Isaiah about the Incarnation of God from a virgin, and She did not think to apply this to Herself, but only thought in the depth of Her humility: “How pleased would I be if I were only the least handmaiden of this blessed Virgin.” And standing before Her is the Archangel Gabriel with his good tidings. The Lord, Himself meek and humble, looked upon Her humility.

He commanded humility of us, contrary to the principles of pride and vainglory that present mankind radiates.

Do you see why there is so much disagreement even within the walls of church and parish? Because everywhere we come up against fiery human vainglory; but if we had that humility to which the Lord calls us, then there would be none of this.

Brethren, let us learn from our Savior, Who came to John as the least sinner in order to be Baptized of him; let us learn from Him this God-pleasing and fragrant virtue, without which, as the Holy Fathers said, no other virtue can be perfected. Amen.