The Sunday after the Holy Cross

To take up one’s cross means to accept and bear unmurmuringly everything unpleasant, painful, sad, difficult and oppressive that may happen to us in our life.
Hieroschemamonk Ambrose (formerly Fr. Alexey) Young | 01 October 2011

There are three parts, or three distinct points that I want to make about this morning’s Gospel reading.

The first two have to do with the Cross, since this is the Sunday after the great Feast of the Exaltation of the Cross, and that is why this particular Gospel reading is appointed for this day.

In 1833 the great missionary, St. Innocent of Alaska, wrote a valuable small introduction to Orthodox Christianity, titled “Indication of the Way into the Kingdom of Heaven”. It was first written in Aleut, the language of one of the native tribes he was working with in Alaska, and was later translated into Russian, where it underwent more than 46 editions in Russian alone before the Russian Revolution. It has also been translated into many other languages and has been available in English for quite some time.

I mention this because St. Innocent was giving these natives the basics, the fundamentals of Christian doctrine and life. I believe, that we Orthodox today are just as much in need of learning these “basics”—these ABCs–as were those natives in Alaska so long ago!

But I also mention St. Innocent’s book because he took the time to explain to the natives exactly what it means to deny oneself and bear one’s cross in life. And rather than paraphrase it in my own I’m going to quote from his text:

Continuing: “These words mean that Jesus Christ does not compel or force anyone to follow Him. He does not want to have as His disciples those who are unwilling or those who have no special desire to follow Him, but wants us willingly and without any compulsion to surrender ourselves wholly to Him.

Consequently, only those who desire to do so enter the Kingdom of Heaven. Christians, your salvation or perdition depends on your own will!”

And then, after exploring the question of free will, St. Innocent then explains what it means to one’s cross.’ He writes:

“There are exterior and interior crosses. To take up one’s cross means to accept and bear unmurmuringly everything unpleasant, painful, sad, difficult and oppressive that may happen to us in our life. And therefore, whether anyone offends you, or laughs at you, or causes you weariness, sorrow or annoyance; or you have done good to someone and, instead of thanking you, he rises up against you and even makes trouble; or you want to do good, but you are not given a chance; or some misfortune has happened, for example, either you are ill yourself, or your wife, or children, or in spite of your activity and untiring labors you are suffering from want and poverty, and are so hard up that you do not know how to make both ends meet; or besides that, you are in some difficulty without malice ,without murmuring, without criticism, without complaint, that is, without regarding yourself as offended and without expecting any earthly reward in return; but bear it all with love, with joy and firmness.” 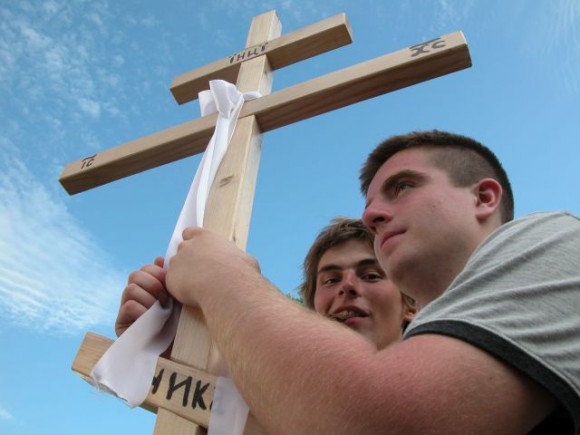 He goes on to discuss what he calls “interior crosses” and “exterior crosses”, but you should read his whole work to understand what he means by these terms.

This duty—to shoulder and manfully bear our crosses, whatever they may be—is a subject about which I’ve spoken, written, and preached, hundreds and hundreds of during the time of my priesthood. This subject, and the sacred Cross itself, is one about which too much can never be said, and it is also related to the subject of making the Sign of the Cross, having crosses or icons of the crucifixion in one’s home, wearing a cross around one’s neck, etc.

It is also related to something else, and this is my second point. We hear much today about the possible—even likely and probable– signs” that we are in the Last Times, the End Times, the times which will lead us to the coming of the Antichrist, the Last Battle (at Armageddon, in the Middle East) and then the return of our Lord Jesus Christ to judge the world.

How will we know it is the Savior returning, and not some false magic or delusion of the Antichrist or the Evil One? Because, as St. Matthew records in his Gospel, “Then the sign of the Son of Man will appear in the heaven…”

What is this Sign? It is the Cross, of course.

And the early Church Father, St. Cyril of Jerusalem, commenting on this, wrote, “The sign of the Cross shall be a terror to His foes, but joy to His friends who have believed in Him, or preached Him, or suffered for His sake.”

In our own time, St. John Maximovitch wrote about the Second Coming; he said: “And the Sign of the Son of God will appear: the Sign of the Cross. The whole world, having willingly submitted to Antichrist, will weep. Everything is finished forever: Antichrist killed; the end of his kingdom of warfare with Christ; the end, and one is held accountable now; one must answer to the true God.”

Brothers and sister, the reason why this appearance of the Cross in the heavens is important for us to know about is because the Cross is the one thing that the devil and his minions cannot imitate or fake, precisely because it is, indeed, a terror to them. A terror to them, yes indeed, but a sign of authenticity for us who believe in and love the Cross.

My last point concerns the intriguing final verse of this morning’s Gospel, which is as follows: “And He [the Lord] said to them, ‘Assuredly, I say to you that there are some standing here who will not taste death till they see the kingdom of God present with power”

This verse has often been used by agnostics, atheists, and the vehemently anti-Christian, to “prove” that Christ was not a prophet, that He didn’t what He was talking about. They assume that this verse speaks of the Lord’s Second Coming, at the end of the ages, even though there’s nothing about that in this verse or in the context surrounding it. For if Jesus thought that some of those who were listening to Him at that moment would still be alive when He comes again at the end of the world, then Christ and the Gospel have failed in their authenticity and the test of truth. But this is what happens when people have an ax to grind, an agenda to fulfill, instead of being completely open-minded and honest in their searching of divine writ.

Aside from the fact that one wonders why the Evangelist and the scrupulous copiers of scriptural texts would have even included this verse if it was really an unfulfilled prophecy – quite aside from that, mind you, this verse has nothing to do with the Second Coming whatsoever.

In fact, what this verse does concern is the awesome event that was very soon to come – in fact, only six later: the Lord’s Transfiguration on Mt. Tabor, when Peter, James, and John were allowed to witness “the Kingdom of God present with power”. Those three disciples were the “some among you” who would not see death before they saw this awesome, indeed, completely otherworldly manifestation of the Almighty Power of our Almighty God, the Lord Jesus Christ Himself, the Son of God and the Second Person of the Most Blessed Trinity. The Transfiguration was like an explosion, a blast of power into our world, and these three disciples were privileged to get a glimpse of it.

Also present at the Transfiguration, as you’ll remember, were the Old Testament prophets, Moses and Elijah. In Jewish belief they were and are associated with the coming of the kingdom; they were expected by the Jewish people to return at the end of the age with the Messiah. This is why Peter wanted to build them tabernacles. He thought the kingdom had arrived with their being present and seeing Jesus glorified. Well, the Kingdom had indeed arrived, it didn’t arrive in the way that Peter and the Jews were expecting or wanting.

But in addition to the Transfiguration, the Kingdom came again when Christ rose from the dead, and then again when He clearly established His Church on St. Peter’s confession of Faith: “Thou art the Christ, the Son of the Living God.” And the Kingdom came still again in Pentecost, when all of the disciples, together with the Theotokos, received and were filled with the Holy Spirit and His power.

Why is this verse appended to the earlier verses about denying oneself and carrying one’s Cross?

Actually, the connection is clear.

Unless we are willing to deny ourselves (which means killing our sinful passions) and bear our crosses, whatever they might be, without complaint, we will not see the Kingdom of God.

There, then: that’s the ultimate point or lesson of this Gospel, of this Sunday after the Feast of the Cross. That’s point of the Cross itself…