The Systematic Persecution of Christians is an International Tragedy 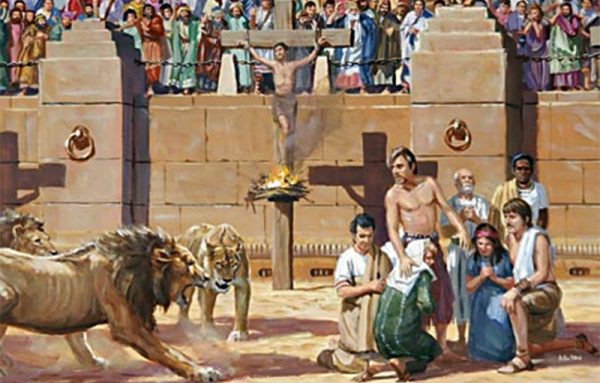 In April last year, a young Nigerian woman, Dorkas Zakka, was murdered along with 12 others in Kafanchan state simply for attending an Easter mass. Local priest Father Alexander Yeycock said that Nigerian military units stood by and did nothing while these murders took place.

Last November in Mina, Egypt, a mob surrounded a Coptic Church threatening worshippers inside, many of whom have also been physically attacked. Local Coptic leader Anba Macarius said that the Egyptian authorities have done nothing to bring those responsible to justice.

Asia Bibi was sentenced to death by hanging for blasphemy in Pakistan in 2010, although the Pakistani supreme court suspended that sentence in 2015. Two Pakistani politicians who advocated on her behalf and opposed Pakistan’s anti-free-speech blasphemy laws were assassinated.

In May last year, two churches in Sudan were destroyed on the orders of the Government.

In June last year, 33 Christian women in Eritrea were imprisoned by the Eritrean Government simply for taking part in prayer activity.

Just two weeks ago, Pakistani man Suneel Saleem was beaten to death by a group of doctors and security guards at the Services Hospital in Lahore when he protested the anti-Christian abuse his heavily pregnant sister had suffered at the hospital.

The systematic persecution of Christians is an international tragedy. It is often either ignored or even encouraged by national Governments.

According to a petition presented to Parliament last year, attacks on Christians have been taking place in around 50 countries since 2014.

In India, 24,000 Christians (many of them converts) were physically assaulted last year. Meanwhile, in the areas of Iraq that have suffered most at the hands of Daesh, both the Christian and Yazidi populations have come close to being wiped out.

Christians are often a target for religious extremists. In 2014, Boko Haram targeted a predominantly Christian village in Nigeria, kidnapping 276 school girls. One hundred and twelve of these girls are still missing and 13 are presumed dead.

In Syria, only around 11 per cent of the population is now Christian — but around 30 per cent of Syrian refugees are Christians.

In Myanmar, the oppression of the Rohingya Muslim population has been accompanied by the targeting of Christian converts. As a result, there are now more than 100,000 Christians living in displacement camps.

North Korea is ranked as the worst country for Christians to live in. Accurate information is difficult to obtain. However, ACN estimates that at least 200,000 Christians have gone missing since 1953. North Koreans who are “caught” practising as Christians face arrest and torture. There are examples of Christians being publicly executed.

We have the levers to influence some of these national Governments. Our objective should be very clear: we demand that Governments where Christians are being persecuted ensure religious freedom and end persecution. We offer full religious freedom in the UK. We should expect the same around the world, especially from our allies and from countries we support financially.

We send £350m per year to Pakistan in overseas aid — yet Blasphemy laws there are routinely used to harass and imprison Christians. UK overseas aid, particularly where it is spent via the national Government in question, should be conditional on concrete and clear steps being taken to deal with this issue. The FCO should make it a foreign policy priority to put diplomatic pressure on these countries to end religious persecution. There will be a substantial halo benefit in combatting extremism. A world where there is religious tolerance will not only be a more just world, but a safer one too.

Most viewed articles
Creating Christian Counter-Culture206
Deny Yourself to Save Yourself155
You are Essential in the Life of the Church94
Patriarch Kirill Prays for an Early Peaceful Resolution of the Conflict in Nagorno-Karabakh65
Why We Celebrate The Feast of The Cross and How We Can Live it50
Holy Cross Church Consecrated on Site Where Nazis Killed 80,000 in Minsk42
‘We Boast in Hope, We Boast in Sorrows’14
Most popular authors
Archpriest Lawrence Farley206
Priest Luke A. Veronis155
Pravmir.com team107
Protopresbyter George D. Konstantopoulos94
Fr. James Guirguis50
Protopresbyter Themistoklis Mourtzanos14