Source: Interfax-religion
Natalya Mihailova | 01 July 2015
Moscow, June 30, Interfax - The United States will try to impose the spread of same-sex "marriages" on other countries by exerting pressure on them, but this policy is unlikely to prove successful, says Alexey Pushkov, the head of the State Duma Committee on International Affairs. 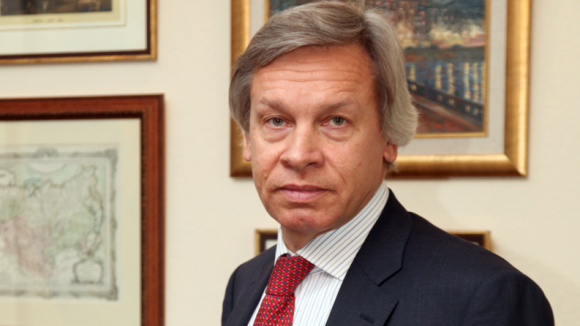 “A huge stratum of humankind will refuse to accept these new values, but this does not stop the U.S. which has already said that one of the main goals of its policy will be to globalize, to universalize same-sex ‘marriages’,” Pushkov said at the Public Chamber hearings on the occasion of the United Nations’ 70th anniversary.

“And here, I think, it will act, of course, not through the UN mechanisms, but through its own inherent ones such as unilateral pressure and by imposing these principles on other countries. But I think this policy will not be successful,” he said.

In his view, these new values will not be reflected in key UN documents for cultural and civilizational reasons.

“Obama wants to universalize same-sex “marriages” but I think this situation will stop at the Middle East because Muslim societies certainly are not prepared to accept that. But that does not mean the attempt will not be made,” the MP said.

In his view, to spread this policy, the U.S. and its allies will act through the Council of Europe, through the EU, where support for gay pride parades and demonstrations in favor of a special status for sexual minorities is official.

Last Friday the U.S. Supreme Court ruled that same-sex couples have the constitutional right to marry in any U.S. state. The ban on official marriage of such couples had earlier remained in 14 states.

Most viewed articles
Number of Christians Murdered for Faith Rose 60 Percent in 2020: 50 Most Dangerous Countries to Be a Christian213
God Is With Us… And Nothing Else Matters133
A Little Light and the Darkness Will Become Heaven97
I Have Fought the Good Fight, I Have Completed the Race69
Churches to Reopen in Greece on January 1866
Metropolitan Hilarion: Actions of Extremists Caused Serious Imbalance in the Centuries-old Christian-Islam Relations in Syria50
Another Cleric of the Ukrainian Orthodox Church Attacked in Zaporozhie35
The Light of Epiphany24
2021 March For Life Becomes Virtual Event Over Safety Concerns Near Capitol and COVID Restrictions6
Getting an Early Start on a Late Pascha1
Most popular authors
Charlene Aaron213
Pravmir.com team151
Fr. Gabriel Bilas133
Protopresbyter Themistoklis Mourtzanos97
Metropolitan Hilarion (Alfeyev)69
Priest Luke A. Veronis24
Andrea Morris6
Archpriest Thaddaeus Hardenbrook1