Source: Union of Orthodox Journalists
Summit participants approved an Action Plan based on the UN agenda, which will be sent to the President, Government and the Ministry of Foreign Affairs of Ukraine.
Pravmir.com team | 04 May 2019 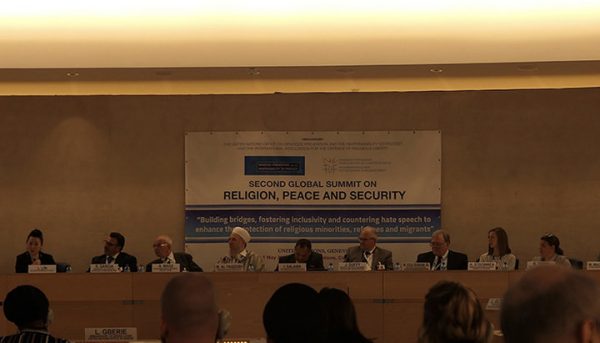 Summit at the UN Headquarters

From April 29 to May 1, 2019, the Second Global Summit on Religion, Peace and Security “Building bridges, fostering inclusivity and countering hate speech to enhance the protection of religious minorities, refugees and migrants” was held at the UN headquarters in Geneva. The event was organized by the Office of the UN Secretary-General, reports theNGO “Public Advocacy”, whose representatives participated in the summit.

“The NGO ‘Public Advocacy’, relying on its consultative status with the UN Economic and Social Council, the results of monitoring the observance of the rights of believers of the Ukrainian Orthodox Church in Ukraine, Orthodox Christians of Montenegro, Macedonia, and Middle Eastern countries, called on the summit participants to enhance the protection of the rights of Orthodox Christians of the UOC, Montenegro, Macedonia in connection with an increase in violations of the rights of Christians in these countries, including those motivated by discrimination on the part of representatives of public authorities,” reports the website of the human rights organization.

Recommendations and a report on the identified violations of the rights of Orthodox Christians in the context of the Action Plan developed by the summit will be sent to the Government of Montenegro and Macedonia, as well as published in the framework of the upcoming regular session of the UN Human Rights Council and OSCE meetings.

Earlier, Bishop Victor noted that the international community is responding to lawlessness against the UOC.

The Union of Orthodox Journalists also reported that the UOC communities are massively seeking protection from international organizations.