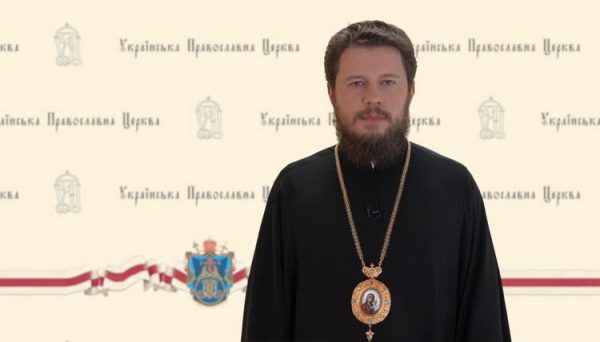 In connection with mass violations of human rights in Ukraine and a real threat of escalation of the religious conflicts in the country, Bishop Victor of Baryshevka, head of the UOC representation to the European international organizations, recorded a video-appeal to officials of the United Nations Organization, Organization for Security and Cooperation in Europe, European Union and a number of other countries.

Reminding them that the Ukrainian Orthodox Church is the largest confession in Ukraine, amounting to over 12 thousand communities, the archpastor underscored, ‘The UOC churches and monasteries are visited by millions of Ukrainian citizens who love their country and their people, constantly praying for the cessation of the war and establishment of peace in our homeland. Most regrettably, however, the Orthodox faithful in Ukraine have become hostages to a political game played by our country leaders, who have also involved Patriarch Bartholomew of Constantinople in these processes, which have already led to numerous clashes on religious grounds. It would seem that a good cause – an attempt to create a One Local Church in Ukraine – should have eventually led to reconciliation, but instead, our country is struck by new confrontations and conflicts’.

His Eminence told them that the churches of the canonical Church, which has a millennium-long history, are captured; the faithful are beat up, while the state officials force its clergy to move over to ‘a new Church’ supported by the head of the Ukrainian state. ‘The Ukrainian Security Service has summoned our priests for questioning, and our bishops can travel abroad only after a preliminary interrogation and an enhanced inspection by special state services’, the hierarch continued, stating that the capture of churches in the presence of police has become a day-to-day activity.

‘For the last five years, politicians of the highest level have openly expressed animosity towards our Church, giving the whole society signs that it is possible to commit crimes against the UOC and its believers with impunity’, he said.

He also referred to the law adopted recently by the Ukrainian Supreme Rada, whereby the Ukrainian Orthodox Church is obliged to change its historical name and include in it an information that does not correspond to reality. ‘This law is a direct interference of the state into church affairs, which violates not only fundamental human rights but also the European principle of autonomy of religious organizations. We have never denied our spiritual communion with the Russian Orthodox Church, from which the Ukrainian Orthodox Church received independence in all administrative, financial and economic issues according to the Tomos on independence and self-government granted to our Church in 1990. For 29 years, the administrative center of the Ukrainian Orthodox Church has been located in the capital of our independent state – the city of Kiev. Nevertheless, the President and other politicians are trying to accuse us of non-existent “ties with Moscow”, “separatism”, “propaganda of the Russian World”, by sticking political labels on our believers that have nothing to do with church life’.

Bishop Victor stressed that in Ukraine today ‘there is a struggle going on over the last barrier of human dimension – the spiritual. Without a doubt, this will entail negative implications not only for our country as it is integrating into Europe, but also for all countries of the European Union and the whole world. Never have the persecutions of Christians been left without a trace for the rulers who committed them; for we know God cannot be mocked’.

Stating that the Ukrainians, by their very nature, are a peace-loving people who stand aloof from conflicts and discord, His Eminence noted, ‘Inciting religious hatred is an artificial process initiated by those who challenge legal, European, democratic and human values.

‘Millions of believers of our Ukrainian Orthodox Church call upon the officials of European and international institutions to raise their weighty voice and intervene in the current situation in Ukraine, using their authority and mandates which provide for the right to speak, act and defend justice through modern tools of diplomacy, law and justice’, he said addressing representatives of international institutions and other countries. He also invited all the stakeholders – journalists, human rights advocates, officials ‘to come to Ukraine and see with their own eyes everything that is happening’.

‘On our part, for the past few years we have been informing the international human rights mechanism, the UN special rapporteurs system on freedom of religion or belief, the UN Human Rights Council, and the OSCE about violations of the rights of the Ukrainian Orthodox Church faithful and will continue to do so’, the UOC representative to the European international organizations said in conclusion.