Source: Breitbart
Thomas D. Williams, Ph.D. | 28 May 2018
After receiving threatening phone calls, the owner of the field hosting a giant sign opposing the repeal of Ireland’s eighth amendment decided to remove the sign Wednesday “for the sake of his wife.” 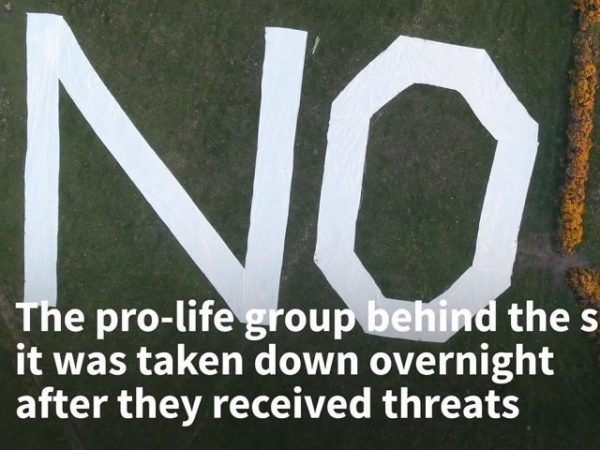 In the lead-up to Friday’s referendum on abortion, an Irish pro-life group erected an enormous “NO” sign in the Dublin Mountains Tuesday and stationed a bull in the same field to guard the sign from saboteurs.

The “Save the Eighth” campaigners, who oppose repealing the eighth amendment that guarantees protection to unborn children, placed the 160-foot-tall sign on Montpellier Hill in the mountains early Tuesday evening.

The pro-life group responsible for the sign said it had resorted to “more innovative methods of communication” after finding its message censored by radio, television, and even on social media.

Last weekend, pro-abortion activists removed a similar Save-the-Eighth sign, which led pro-life campaigners to place the bull in the field as a precaution.

“The sign is placed in a privately owned field and is guarded by a large bull that is currently grazing in the field,” a spokesperson for the group said.

Leaders of the Catholic and Presbyterian churches have been vocal in their opposition to repealing the eighth amendment, telling voters they are the “last line of defense” of unborn babies.

“To be against abortion is not simply ‘a Catholic thing,’” wrote Archbishop Eamon Martin, the Primate of All Ireland, in a May 19 statement. “The innate dignity of every human life is a value for the whole of society – for people of all faiths and none. It is rooted in reason as well as in faith.”

“To take away an innocent human life can never be simply a matter of personal choice,” added Ireland’s highest ranking Catholic prelate.

Meanwhile, a number of Irish celebrities, such as U2’s Bono and actor Liam Neeson, have chimed in supporting the repeal of the amendment.

Framing the abortion question as a women’s rights issue, Neeson wrote that Irish men “must stand with women” by allowing them access to legal abortion.

The popular Irish rock band U2 tweeted their support for legalizing abortion in Ireland, sparking a tidal wave of reactions from pro-life fans dismayed with the group’s support of killing the unborn.

After U2 tweeted a photo endorsing the “Repeal the 8th” campaign for the upcoming May 25 abortion referendum, fans erupted with a barrage of more than 800 overwhelmingly negative replies, with many voicing their decision to stop supporting the band or attending its concerts.

For years, international pro-abortion forces have targeted Ireland because of its defense of the right to life, and in 2016 DCLeaks.com revealed that left-wing billionaire George Soros has been using his Open Society Foundations (OSF) to turn Ireland into a pro-abortion country. Soros reportedly intends to use Ireland as a prototype to overturn anti-abortion laws in Catholic countries around the world.

The United Nations has also attacked Ireland for its pro-life laws, demanding that the predominantly Catholic nation repeal the Eighth Amendment.

A UN committee in 2014 went so far as to claim that the Irish constitution violates international law, and in 2016, a ruling from UN human rights “experts” said that Ireland’s abortion ban “subjects women to discriminatory, cruel and degrading treatment.”