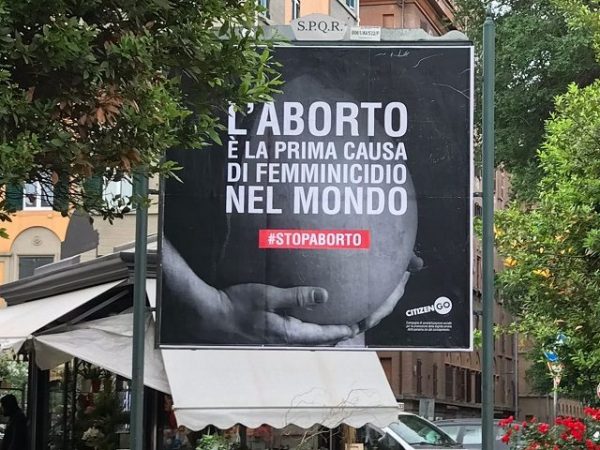 Italy’s abortion lobby has appealed to the mayor of Rome to have pro-life posters removed in the lead-up to the city’s annual March for Life.

The posters and billboards that have provoked the wrath of abortion groups declare that “Abortion is the number one cause of femicide in the world.”

According to the BBC, the campaign has generated “widespread anger and led to appeals to the mayor to get the posters removed.”

Rome’s mayor, Virginia Raggi, has already shown her willingness to cave to pressures from pro-abortion groups and had a large pro-life billboard taken down in April, despite the fact that the group posting it had paid for the space and obtained all the necessary permissions. The billboard announced: “You are here because your mom didn’t abort you.”

Rome’s city hall has never removed pro-abortion advertising and presumably would never do so.

Pro-life groups in different parts of the world have decried the bias among social media guardians as well as purportedly neutral government officials in stripping pro-life citizens of their right to free expression while favoring abortion promoters like the International Planned Parenthood Foundation (IPPF).

One of those calling for the removal of the new posters is a public official, the president of one of Rome’s municipalities, Francesca Del Bello.

“They are offensive for all women, especially those who have known the difficult experience of abortion or violence,” she said in a statement cosigned by two other public servants, Lucrezia Colmayer and Cecilia D’Elia.

The international pro-life and pro-family group CitizenGo initiated the poster campaign to coincide with the annual Italian March for Life to be held in Rome this Saturday, in remembrance of Italy’s passage of Law 194, which legalized abortion on May 22, 1978.

Despite emotionally charged protests, no one has contested the fundamental claim of the pro-life campaign, namely, that abortion is the number one cause of female deaths in the world.

According to Worldometers, an independent website that posts live counters of world statistics in real time, so far in 2018 there have been more than 15.5 million abortions worldwide, as compared to 21.6 million deaths from causes other than abortion.

Last year, Pope Francis threw his moral support behind Rome’s March for Life, highlighting the inviolability of human life and sending his apostolic blessing to participants in the annual demonstration.

In a message to the organizers of the pro-life March, Francis expressed his wish that the march might “promote adherence to the value of human life and the acceptance of this incommensurable divine gift in all its fascinating richness.”

The pope also promised his prayers for the success of the event as well as sending his “apostolic blessing” to all participants.