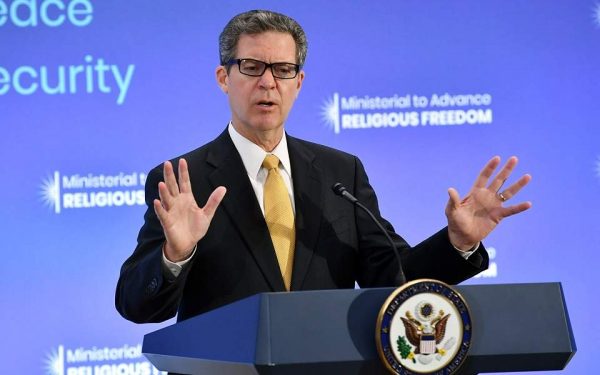 The United States Ambassador at Large for International Religious Freedom Sam Brownback on Thursday urged Turkey to abandon plans to reconvert the 6th century monument of Hagia Sophia into a mosque.

“The Hagia Sophia holds enormous spiritual & cultural significance to billions of believers of different faiths around the world,” Brownback said in a tweet on Thursday.

“We call on the Govt of Turkey to maintain it as a UNESCO World Heritage site & to maintain accessibility to all in its current status as a museum,” the ambassador added.

His tweet comes after Greek Culture Minister Lina Mendoni sent a letter to representatives of UNESCO’s member-states informing them of Ankara’s plans to turn the monument into a mosque even though it has been a museum since the 1930s.

Most viewed articles
Number of Christians Murdered for Faith Rose 60 Percent in 2020: 50 Most Dangerous Countries to Be a Christian183
Admitting That We Hate168
Funeral for Metropolitan Philaret Held in Minsk106
Building a Fire and Preparing for Theophany85
God Is With Us… And Nothing Else Matters71
Churches to Reopen in Greece on January 1849
I Have Fought the Good Fight, I Have Completed the Race37
A Little Light and the Darkness Will Become Heaven1
Most popular authors
Charlene Aaron183
Archpriest Michael Gillis168
Pravmir.com team154
Fr Gregory Scratch85
Fr. Gabriel Bilas71
Metropolitan Hilarion (Alfeyev)37
Maria Trushanina1
Protopresbyter Themistoklis Mourtzanos1